By Ikechukwu Nnochiri
ABUJA – The Chief Judge of the Federal Capital Territory High Court, Justice Ishaq Bello, has granted bail to the embattled National Publicity Secretary of the Peoples Democratic Party, PDP, Chief Olisa Metuh, to the tune of N300million with two sureties in like sum.

The Judge maintained that the place of abode of the sureties must be verified by the court.

Ruling on the bail application Metuh made through his lawyer, Dr. Onyechi Ikpeazu, SAN, the Judge held: “I am satisfied that the oral application of the defendant succeeds, accordingly, he is granted bail in the sum of N300million with two sureties in the like sum, whose places of abode must be verified for easy access”.

Metuh is facing a two-count criminal charge bordering on his alleged destruction of evidence against him.

He was on Thursday, docked before the ‎court by the Economic and Financial Crimes Commission, EFCC.

‎Meantime, for the third time, the PDP spokesman who pleaded not guilty to the charge against him, was also brought to court today in handcuffs by prison officials.

EFCC, alleged that Metuh who is also facing another seven-count criminal charge before Justice Okon Abang of the Federal High Court in Abuja, tore and attempted to chew a confessional statement he made under caution while undergoing interrogation.

The anti-graft agency insisted that the said statement would have been vital to its prosecution of the criminal ‎case pending against the defendant before the Federal High Court.

It said that Metuh, by his action, committed an offence contrary to sections 166 and 326 of the Penal Code Act.

Justice Bello had on the day Metuh was arraigned before him, queried why the EFCC failed to incorporate the current charge to the one already pending before the FHC.

It will be recalled that Justice Abang ‎had on Tuesday, also granted Metuh bail to the tune of N400million.

The court however ordered that he should be remanded at Kuje Prison pending when he is able to perfect all the bail conditions. 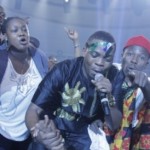