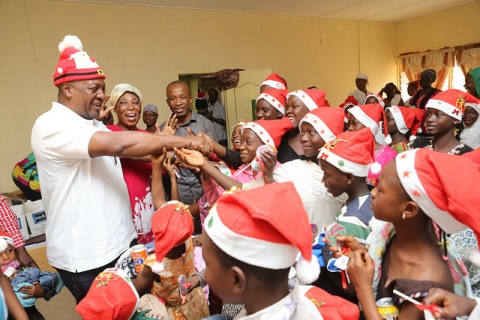 Residents of Bolgatanga are angry over the municipal assembly’s expenditure of Gh¢5,000 on the decoration of the principal streets of Bolgatanga to commemorate the Christmas festivities.

The assembly bought six Christmas trees to be placed at various intervals on the Bolgatanga-Navrongo road, out of which two were stolen, and also some paraphernalia which were wrapped round street light poles.

The residents claimed the municipality has more pressing developmental issues.

They were reacting during a phone-in programme on Tanga Fm, a private radio station in the municipality, when the host raised the issue after a press soirée with the Upper East Regional Minister the previous night.

The Upper East Regional Minister, Mr James Zuuga Tiiga, said since he assumed office, he had been working with a group of think thanks to put in place structures to serve as springboard to project the developmental agenda of the region.

He said the support of the Savanna Accelerated Development Authority (SADA) had also been sought to remap the region to show the comparative advantage of the various districts.

“For those of us who know the region quite well, we know that it can be divided into three development enclaves. These are the eastern, the central and the western. Each of these has its potentials. We therefore continue to hammer on this to allow potential investors to know where to put their money.”

He said the eastern section comprised Pusiga, Garu-Tempane, Bawku Municipal, Binduri and Bawku West, which are noted for the production of watermelon and onions and experience gluts during the harvesting period.

There also existed investment potential in processing, storage and canning.

Other potentials, he said, were livestock farming and cultivation of cereals, indicating that the Tamne Valley has a huge potential for irrigation.

The central zone which consists of Bongo, Nabdam, Talensi and Bolgatanga, he noted, has large deposits of minerals such as gold and rocks as well as clay which are capable of providing building materials for the construction industry.

In addition, he said the area was classified as the biggest potential for basketry and leather products as well as the production of early millet and small ruminants.

The regional minister said the western corridor boasted of arable land for rice and vegetable production with valleys that could be developed into irrigation schemes for all year farming.

He added that plans were underway to construct a ring road around the regional capital to ease congestion in Bolgatanga, especially during rush hours.

He also said 2016 would be a critical year in the country’s democratic dispensation and urged the media to be circumspect in their reportage so as to entrench Ghana’s democracy.