THe BNI has picked up the Managing Director of a security company in connection with pictures taken showing vehicles allegedly meant for the NCCE (National Commission for Civic Education), which was being branded with NDC colours.

The pictures which has gone viral on social media is sparking another round of what some believed is an abuse of office and incumbency ahead of the general elections.

Lawyers of the MD of Granite and Marbles confirmed to Joy FM’s Newsfile Saturday and added that two other security men have also been arrested.
http://ghanapoliticsonline.com/
From the angle of the picture taken, it is being inferred that the photos were captured from the Managing Director’s company.

The compound where dozens of Mahindra vehicles were kept for spraying,shares a wall with the security company.

The police invited the MD demanding that he writes a statement. But after the Managing Director insisted otherwise, BNI officials picked him and the two others up. 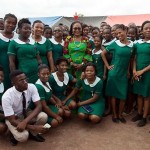