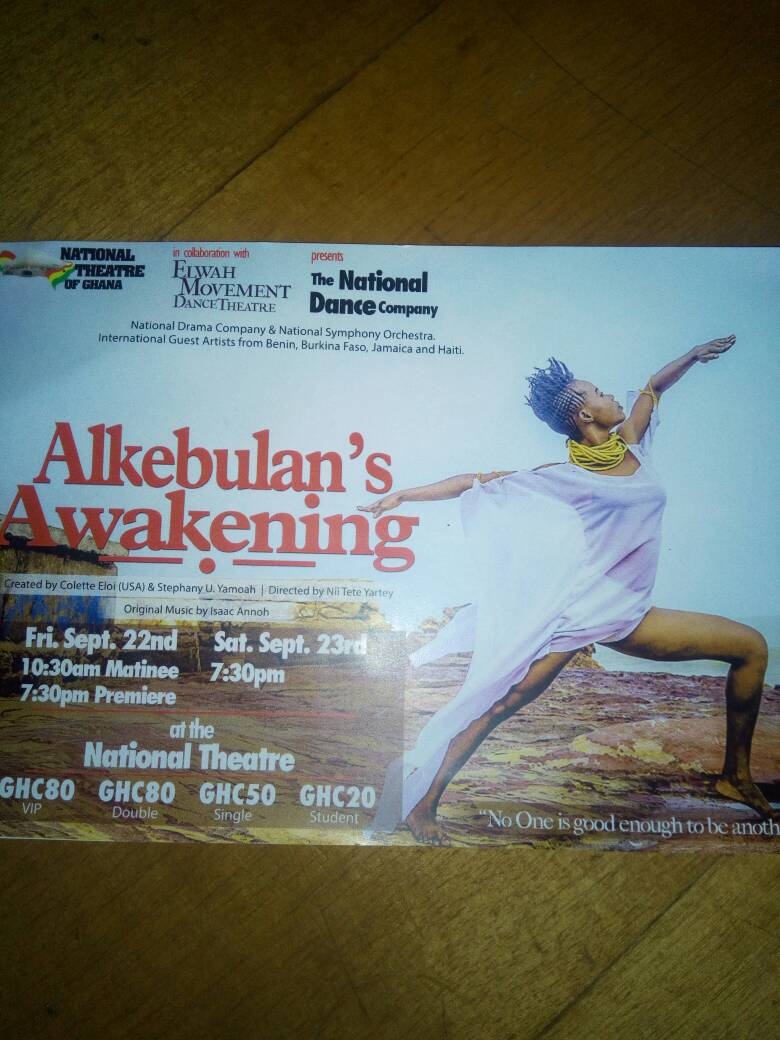 The National Theater of Ghana in collaboration with the Elwah Movement Dance Theater is set to present ALKEBULAN’S AWAKENING a dance theatre produced by the National dance company.

A month to due date there is a brouhaha over the content of the drama. The drama, created by Colette Eloi(USA) and Stephany U. Yamoah and directed by Nii Tete Yartey seeks to portray the past and awakening of Africa.

The intriguing drama has a scene that shows nudity and a bitter part of our past as Africans and the programs manager Mr. William Ashong wants that scene taken out because he believes Africans have moved away from the past and their mindset about the past should be changed and redirected in a positive way. The artistic director dance Mr. Nii. Tete Yartey also comes with the argument that Africa has been raped and we need to be reminded of things that went on in the past to learn from it. The diverse views of both parties got intense at a meeting about the drama.

According to an eye witness who spoke to Ghanacreativearts.com, contributor THELMA SEDEM KUDAH, and member of the cast whose identity is being withheld, the argument got intense and the room went wild as punches where being thrown and emotions let loose.

Papers were seen flying at every corner of the room as the room was turned upside down and the drums and others instruments scattered. In the midst of the fight and confusion, the deputy executive director Tawfik Prah was present but helpless to the situation until the timely intervention of Madam Amy Appiah Frimpong the Executive director.

Both parties have strong points for their arguments and they both have the public as their priorities but from different angles. Mr William Ashong believes we need to move on by putting the positive values out there and Mr. Nii Tete Yartey argues that before reconciliation can happen, the issue has to be dealt with that is why he believes the explicit nature of the scene should be shown so the public can feel the emotions and anger and better understand the past.

“We need the public to rethink and make things work” Mr. William Ashong argues. Mr Nii Tete Yartey says “I don’t want to spoonfeed the public. I want them to think and get answers”. Mr Alfred Danso, the marketing manager agreed both the Artistic director, Nii Tete Yartey and programs manager William Ashong have great creative minds but should also find a way to put their heads together to make this production the best without offending anyone. The “nudity” scene is still in the drama says the eyewitness. Whether or not it will be in the premiere, we all are yet to find out.