The Senior National Male Football Team as part of their activities before their FIFA World Cup qualifying game against Uganda on Friday paid a courtesy call on the Buipewura and the Dakpema.

They first visited the Buipewura, who happens to be the Paramount chief of the Tame Traditional Area.

Although, the Buipewura wasn’t around his kinsmen welcome the Black Stars and told the team that they are urging them to score two goals in each half.

And the Kinsmen presented the Black Stars with Kola nut, which tradition demands and also on behalf of the Buipewura, presented 100 tubers of yams and one bull to the team.

Captain Asamoah Gyan on behalf of the Black Stars assured the kinsmen that they also make them proud by beating the Ugandans emphatically. 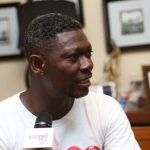