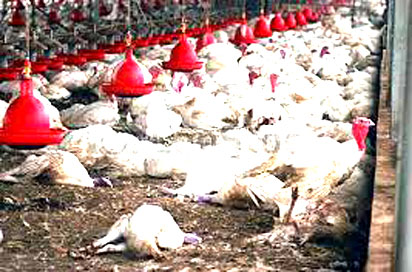 Jos—Following the recent killing of about 20,000 birds in Plateau State as a result of a fresh outbreak of Avian Influenza, the Head of Avian Influenza Control Office, Dr. Ayuba Haruna, has appealed to poultry farmers to cooperate with government to curb the spread.

Dr. Haruna advised the farmers not to cover up any disease in their farms but promptly report such for urgent steps to be taken against the disease.

He confirmed that 10 farms were so far affected by the disease but noted that intensive awareness was being created so that every farmer would and beware of the outbreak to take proactive and bio-safety steps to curtail it.

However, a farmer, Mr Enoch Ejukolem, whose farm was affected by the disease, said the outbreak had almost crippled his business as he had lost almost ten thousands birds  in one week.

He appealed to governments at federal and state levels to assist affected farmers to revive their businesses.

Meanwhile, the State Ministry of Agriculture is increasing sensitization campaigns to educate poultry farmers on the steps to be taken to avert any case in their farms.