…remanded in prison custody
As Police arraign 10 protesters in Rivers

The Federal Government, yesterday, docked the detained leader of the Indigenous People of Biafra, IPOB, Mr. Nnamdi Kanu, before the Abuja Division of the Federal High Court on a six-count criminal charge bordering on treasonable felony.

Kanu was arraigned alongside two other pro-Biafra agitators, Benjamin Madubugwu and David Nwawuisi.

The trio took turns and pleaded not guilty to the charge, which was  signed by the Director of Public Prosecution, DPP, Mr. Mohammed Diri.

In the charge, the Federal Government alleged that the accused persons committed treasonable felony by spear-heading an illegal agitation for the seccession of ‘Biafra Republic’ from Nigeria, an offence punishable under Section 41(C) of the Criminal Code Act, CAP C38 Laws of the Federation of Nigeria.

FG alleged that the three accused persons were the ones managing the affairs of the IPOB, which it described as ‘an unlawful society.’

To remain in custody

Meantime, shortly after the accused persons pleaded innocence to the charge, yesterday, the DPP, who is personally prosecuting the case for the government, applied for them to remain in custody of the Department of State Services, DSS, pending the determination of the case against them.

Diri insisted that it would be more convenient for the prosecution to produce the accused persons to court from the DSS detention facility for trial than from Kuje prison.

Citing security reasons, Diri, contended that anything could happen on the way while bringing the accused person to court from the prison.

“‘The DSS had never failed to produce the defendants in court, but we have had instances where accused persons in prison were not brought to court for trial owing to logistic problems.

“‘The nature of the offence and the response of friends, relatives and sympathisers of the defendants that we have seen, particularly when the case was before the Magistrate’s Court, is what has prompted this application.

“I have no personal interest against the accused persons. I am only doing my job as the prosecutor and the DPP of the federation,” Diri added.

However, his application was vehemently opposed by counsel to the defendants, Chief Chuks Muoma, SAN, who told the court that his clients would rather prefer to be remanded in prison custody.

Muoma argued that the prison was the most appropriate place to remand an accused person that had entered plea before a court of competent jurisdiction.

”’No amount of convenience can over-ride the law. The prosecution has not disputed the fact that we don’t have access to our clients. They have not also disputed the fact that our clients do not have access to phone calls. Two court orders in respect of this matter have been disobeyed by the DSS, so what is the guarantee that it will obey whatever order this court will make? ” Muoma queried.

Besides, he accused the DPP of giving evidence from the bar by insinuating that the DSS detention facility is more secure than Kuje prison.

After listening to both parties, trial Justice James Tsoho, over-ruled the DPP and remanded the defendants in Kuje prison.

”’I have given due consideration to arguments by the two counsels. It is my respectful view that after arraignment, the appropriate and constitutional pace for remand of an accused person is the prison except when there is an extra-ordinary reason.

”It is my view that the complainant have all it takes to provide logistic and security requirements not withstanding the distance between the prison and the court.

”Therefore, application for remand of the defendants in DSS custody is refused. Accordingly, the defendants are hereby remanded in Kuje prison pending trial,” Justice Tsoho held.

Meantime, the court has adjourned till next Monday to entertain arguments from both parties on whether or not the accused persons should be released on bail pending hearing and determination of the charge against him.

One of the charges against the accused persons read: “That you, Nnamdi Kanu and other unknown persons, now at large, at London, United Kingdom, between 2014 and September, 2015, with intention to levy war against Nigeria in order to force the President to change his measures of being the President of the Federation, Head of State and Commander-in-Chief of the Armed Forces of the Federation as defined in Section 3 of the Constitution of the Federal Republic of Nigeria 1999 (as amended) by doing an act to wit: Broadcast on Radio Biafra your preparations for the states in the South- East geo-political zone, South-South geo-political zone, the Igala Community of Kogi State and the Idoma/Igede Community of Benue State to secede from the Federal Republic of Nigeria and form themselves into a Republic of Biafra, and thereby committed an offence punishable under Section 41(C) of the Criminal Code Act, CAP C38 Laws of the Federation of Nigeria 2004.”

It will be recalled that Kanu had on December 23, 2015, declined to enter his plea to the charge which was then before Justice Ahmed Mohammed of the high court.

It will also be recalled that Justice Ademola Adeniyi of the same high court had on December 17, ordered the ‘unconditional’ release of the IPOB leader, Kanu, from the custody of the DSS.

Kanu, who is also the Director of Radio Biafra and Television, was on October 1, arrested in Lagos by security operatives, shortly after he arrived Nigeria from his base in the United Kingdom.

He was subsequently arraigned before a Chief Magistrate’s Court in Abuja over allegation that he engaged in criminal conspiracy, managed and belonged to an unlawful society.

Kanu, on October 19, pleaded not guilty to the charge and was eventually granted bail to the tune of N2million.

However, the accused person alleged that the Nigerian government refused to release him from detention despite the fact that he met the bail conditions.

The Magistrate Court subsequently struck out the charge, even as it discharged the accused person.

In the bench ruling, Kanu was docked before trial Justice J.T. Tsoho alongside two other pro-Biafra agitators, Benjamin Madubugwu and David Nwawuisi.

Justice Tsoho, in a bench ruling, ordered that they should be remanded in prison custody.

When the matter was called up, yesterday, Kanu, sought the permission of the trial judge to address the court.

Speaking from the dock, Kanu who was flanked by the other two accused persons, gave reasons why he would not subject himself to trial before Justice Mohammed.

The IPOB leader said he had no confidence that the court would grant him fair trial, saying he would rather remain in detention than to be subjected to the rigours of trial that would eventually amount to nothing.

Kanu insisted that the Department of State Services, DSS, had since his travail commenced, shown that it had a knack for disrespecting valid court orders.

He said: ‘Based on information available to me, I am convinced that I will not receive fair trial before this court.

‘”There has been several rulings delivered by competent courts of jurisdiction which the Department of State Services, DSS, never respected”.

At that juncture, the DPP, Diri, who is personally prosecuting the matter for the government, interjected, saying it was premature for the 1st accused person, Kanu, to start raising such issues.

The DPP, contended that section ?396(2) of the Administration of Criminal Justice Act, ACJA, 2015, provided that the court must firstly enter the plea of an accused person before entertaining any preliminary objection against the substantive charge.

“My lord, under section 396(2) of the ACJA, an objection to trial may be raised by the defendant only after plea is taken, but not before.

“In this case, the defendant has decided to put the cart before the horse by raising objection to his trial before the charge is read to him and his plea taken.

“I urge your lordship to over-rule the objection of the 1st defendant and order that the charge be read to the three accused persons for the purpose of taking their plea, the DPP submitted.”

Responding, Kanu’s lead counsel, Mr. Egechukwu Obetta, urged the court  to ignore the DPP and accede to the request of his client.

Ruling on the issue, yesterday, Justice Mohammed, disqualified himself from handling the matter, saying he will remit the case-file back to the Chief Judge of the High Court for re-assignment to another Judge.

The Judge said: ‘I am of the view that the 1st defendant has the inalienable right to object to being tried by this particular court.

They were arraigned on two count charge of criminal conspiracy and treasonable felony.

Hearing on the cases were adjourned to 21 and 28 January while the suspects were remanded in prison custody.

The state Police Public Relations officer, DSP Ahmad Muhammad said they were arrested while on their way to embark on pro Biafra protest from  the neigboiring state.

He warned that the command will not tolerate any attempt to disrupt peace in the state. 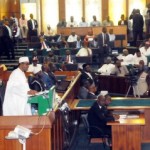