I am not a pollster, but honestly uncle Ben Ephson erred when he said the NPP candidate for Ayawaso North, Amidu MZ, will beat Yussif Jajah of NDC. Even NPP members in Ayawaso North know that Yussif Jajah’s visibility in that constituency has dwarfed their candidate’s campaign.

In fact, so far as Ayawaso North parliamentary election is concerned, Yussif Jajah is facing no stiff competition from anybody. The NPP elected a bad candidate, and the party is paying for it.

I criticized the NPP for electing Mr Mireku as its candidate for Ayawaso East but so far, Mr Mireku has proved his mettle though he will not win the seat. I expected Amidu MZ to tackle Yussif Jajah squarely since both of them are relatively young.
Mr Mireku’s campaign is even resonating with the people compared to Amidu MZ who is a Muslim.

The little work I have done in Ayawaso North constituency indicates that Amidu MZ will garner votes from only core NPP members. He lacks the charisma and appeal to warm his way into the hearts of floating and first time voters.

He is completely detached from the constituency even though I understand he lives around New Town. Comparatively, Yussif Jajah enjoys the support of the youth and floating voters. His several years of youth activism in that constituency adds to his advantage.

Naturally, he is down to earth. How he relates to people is apt for a young politician like him. He has revived the hitherto dipping confidence in the NDC, especially among the youth of Ayawaso North.

I don’t know how uncle Ben Ephson came by that weird conclusion, because even in terms of electoral figures of past election, the NPP is nowhere near NDC.

In 2012 when an astute NPP candidate for the same area, Fofana, challenged Dr Mustapha Ahmed, who had lost touch with his constituents, the latter won the election with a margin of over 8000 votes.

Dr Ahmed’s abysmal performance as MP reflected in the election of Yussif Jajah. Many NDC members who vowed not to associate with the party again in that constituency, I dare say, are now back with the emergence of the new ‘kid’ now in the saddle.

I don’t live in Ayawaso North, neither do I vote there, but the reality there is that Amidu MZ may not be able to garner even the over 16000 votes his predecessor, Fofana grabbed in the 2012 election.

There are quite a number of NPP supporters who will vote for Nana Addo in Ayawaso North but will not vote for Amidu MZ. The NDC is most likely to win that seat with a margin in excess of over 10000 votes.

By A B A @Asabaham 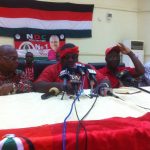