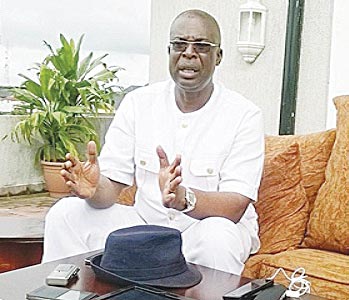 SOUTHERN Ijaw local government area of Bayelsa State will again be on the spot light tomorrow as the Independent National Electoral Commission, INEC conducts the rescheduled supplementary governorship election in the area.

Though the exercise is also slated to hold in 101 units across six local government areas of the state, Southern Ijaw council is no doubt the battle ground for the two leading parties, the Peoples Democratic Party, PDP and the All Progressive Congress, APC and  it will decide who governs the state for another four years.

Described as one of the biggest local government areas in the state, Southern Ijaw also has one of the most difficult terrains in the Niger Delta. Most of its communities are far flung and could only be accessed by water.

The few communities in the council that could be reached by road are Amassoma, Igebiri and, of late, Ayama, courtesy of the Governor Seriake Dickson-led administration, which resuscitated the long abandoned Central senatorial district project.

The road, designed to link council headquarters and its adjoining communities close to the Atlantic coast in the council area to mainland Yenagoa, has reached Ayama.

Its vast swathe swamp of rivers, creeks and rivulets and dense mangrove vegetation has made effective policing of the area a herculean task for the security agencies. The area is also known for having the highest number of militant camps at the height of militancy in the Niger Delta.

Therefore, it did not come as a surprise to many when the council relapsed to its infamous past as hot bed of violence as witnessed during the December 5 and 6 governorship polls, which degenerated into bloodletting. The area was turned into a battle ground by political thugs, a development that led to the cancellation of the exercise by the INEC.

Cancellation of the exercise The state REC, Baritor Kpagih, had while announcing the cancellation said there were reports that the poll in the area was “substantially” marred by violence, ballot box snatching and hostage taking of electoral officers.

The pronouncement came immediately after the state Returning Officer, Prof. Zana Akpagu, told newsmen and election observers that he would not be able to take a final decision on the exercise until the result of the Southern Ijaw election was received.

“We have yet to receive results from Southern Ijaw Local Government Area. They (Southern Ijaw LGA) have 120,827 registered voters. As a result of this, I, as the returning officer, cannot return on this election until the results of this local government (Southern Ijaw) are received,” he had declared.

INEC reacts: But the REC stated that he was, on behalf of INEC, cancelling the election in order to protect the integrity of the election process.

“You will recall that the Independent National Electoral Commission conducted governorship election in Bayelsa State on the December 5, 2015. The commission announced that the poll should be discontinued in some local government areas, including Southern Ijaw LGA of the state.

“As of today, December 7, 2015, the results of the election in all local government areas, except Southern Ijaw Local Government Area, have been collated.

“Reports on the election conducted in Southern Ijaw LGA on December 6, 2015, revealed that the election was substantially marred by violence, ballot snatching and hostage taking of electoral officers.

“These include reports from political parties, observers, both local and foreign, among others. These fall short of international acceptable standard for credible elections.

Interestingly, the local government has 120,827 registered voters, the second highest after Yenagoa with 135,025 registered voters, hence the desperation of both parties to carry the day in the council, which has turned out to be the beautiful bride in the Bayelsa 2015 governorship poll.

Governor Seriake Dickson, the PDP candidate and former governor Timipre Sylva of the APC had been in the trenches in readiness for what has been dubbed as a fight to finish.

After the first round of election in seven out of the eight local government areas of the state, results from INEC have confirmed the contest as a two -horse- race between the Dickson and Sylva. According to figures from INEC, PDP polled 105,748 votes while the APC got 72,594. The Peoples Democratic Movement, PDM came a distant third. As it were, the PDP seemed to be coasting to victory before the election in Southern Ijaw  was cancelled due to widespread violence and late commencement of the voting process.

However, the APC who are trailing the PDP in second position had cried foul, claiming that they were already winning with  a landslide in Southern Ijaw from the early results. The APC further argued that if election in Southern Ijaw should be cancelled on the ground of violence, then the entire polls ought to have been cancelled as there was also widespread violence in other local councils.

In the meantime and expectedly, Southern Ijaw Local Council has become the beautiful bride because of its capacity to decide the outcome of the polls.

Accordingly, the two leading contenders, since the resheduling have been making subtle overtures to woo eligible voters.

Politics of the state

Observers of the unfolding political drama in the state had expected that the shifting of the supplementary poll to January 9 would do well to douse tension in the area, but characteristic of the politics of the state, the two contenders have continued to talk tough, trading accusations and counter accusations.

Howbeit, the two contenders have equal chances of emerging winner, but the PDP would disagree as they posit that their over 30,000 leading votes placed them as the top favourite.

Fears over poll: It is feared that the supplementary poll might not attract large turnout due to the pervading atmosphere of tension following accusations and counter-accusations from both sides of alleged stockpiling of arms in the area to be unleashed on Election Day to cow the electorates with a view to rigging the poll as well as alleged intimidation of perceived opponents by both sides.

Though the stake is high, the state governorship election poll had been characterized by voters’ apathy. The voting trend was the same in the various councils with only about 40 per cent of the registered voters coming out to cast their votes in the seven local councils so far declared.

It will be a miracle if that of Southern Ijaw council area is different.