Vice-President Dr Mahamudu Bawumia has been overstraining himself in order to turn around the Ghanaian economy, Professor Ransford Gyampo, a political science lecturer at the University of Ghana, has said.

According to him, the stress the vice-president goes through every day is more than enough to ignite his unwellenss, therefore, his rest is well-deserved.

Prof Gyampo, however, questioned the decision by the vice-president to go to the United Kingdom (UK) for medical attention rather than opting for a place in his home country.

Dr Bawumia was flown to the UK Friday, 19 January for advanced medical attention after reporting of ill health.

A statement signed by Chief Of Staff Frema Opare on Saturday said he was flown to the UK on the advice of his doctors.

“He was accompanied by the Second Lady Hajia Samira Bawumia,” the statement added.

Commenting on this development on his Facebook page on Monday, 22 January, Prof Gyampo said: “Our very affable and hardworking Vice-President of the Republic, Dr Bawumia seems to have his feet firmly on the pedal as far as Ghana’s economic management is concerned. As such, he is clearly over-working himself. The stress he goes through by the day, is more than enough to ignite unwellness. He must, therefore, rest and recover fully. But why in London?

“Leaders in Ghana have the penchant for touting their achievements in building our infrastructure. Yet they are always the first to show us through their actions that our infrastructure, particularly our health facilities, are nothing to write home about. They easily fly out to the U.K. and South Africa to seek medical attention at the slightest illness. How did these countries build such attractive medical facilities? Can’t we learn from them? Are they more capable than us? I do not have any evidence to show that our Veep is out there to seek medical attention and it may well be true that he’s only gone to have some rest.

“But a good political strategist could have advised the choice of resting place to avoid the needless perception created that he’s gone to seek medical attention in the U.K. Seeking medical attention in the U.K. isn’t wrong in itself. It only tacitly confirms the failure on the part of our political leaders to build credible health facilities for the good people of Ghana. Because I don’t have a contrary information, I believe the Veep is in the U.K. to rest as we’ve been told. But the resting could have taken place at a hideout in Ghana outside the noisy and busy environment of Accra. Peduase Lodge, Royal Senchi, Aqua Safari, Busua Beach Resort, Bird Rock Hotel in Anomabo near my hometown Saltpond, Manna Height Hotel in Mankessim, near my hometown Saltpond, and all of them, are there!

He added: “A simple information asking relatives, friends and well-wishers to stay away or allow the Veep to rest, with all his phones switched off would have been fine.

“There are so many resting places in Ghana. Friends and family members of the Veep would be considerate enough to stay away when they are told to do so to allow our Veep have some rest. Family relations and friends are not more powerful than the security detail of the Veep of Ghana. If you want to visit the Veep and you are told he is resting, you can’t see him, finito! Actions and inactions of politicians must be guided by many variables including political tactics and strategy. Speedy recovery, our affable and hardworking Veep. It is well with you. When you resume work, kindly note that you cannot do it all alone. Empower others who understand the issues like your good self to also work hard in order to ease the work pressure on you a little.”

Meanwhile, Minister of Information, Mustapha Abdul-Hamid has explained that the decision to travel to the UK was for the vice-president to have absolute rest, as advised by his doctors.

“The purpose of his trip was to have a complete rest… where you don’t have many people like friends and so on, worrying him,” he told Chief Jerry Forson on the Ghana Yenson show on Accra 100.5FM on Monday January 22. 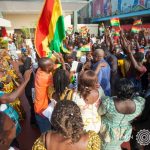