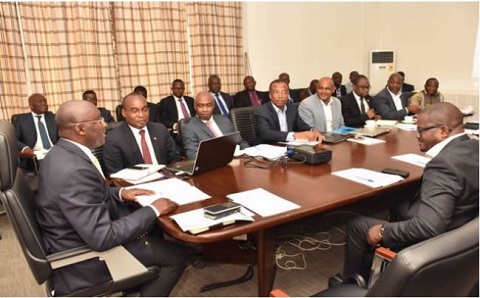 The Northern Youth for Peace and Development (NYUPED), a civil society pressure group headquartered in Tamale, the Northern regional capital, says it has picked up signals showing that Vice President Dr. Mahamudu Bawumia is being downgraded in the Akufo-Addo government.

The group has issued strong warnings in the wake of the said development, saying it would not tolerate a repeat of “the gross disrespect” dished out to the late Alhaji Aliu Mahama as Vice President. The forewarnings came up during a news conference held Wednesday by the organisation in Bolgatanga, Upper East regional capital, to wrap up the launching of the 2017 Edition of the NYUPED National Achievers Awards.

“Other issues we wish to raise include the treatment being meted out to the Vice President, His Excellency Dr. Alhaji Bawumia. The signals we have picked up so far indicate that the Vice President is quietly being sidelined by some forces from performing his duties as Vice President.

Mr. Adams added: “During the 2016 general elections, our organisation alone mobilised a good number of over 500,000 youthful voters and support for the NPP with our own resources. And thankfully the party won massively. So, our interest as a people should not be taken for granted.”

Whilst showering praise on the New Patriotic Party (NPP) government for scrapping the “nuisance levy” imposed by the previous government on head porters (kayayei) and for its determination to stem the tide of rural-urban migration through the one-district-one-factory and one-village-one-dam policies, the organisation also called for a probe into the running of the Savannah Accelerated Development Authority (SADA).

“As an organisation that advocates social justice among other things, the development of the north is paramount to us. So, we are also calling on the President to interrogate the issues of the Savannah Accelerated Development Authority (SADA) and streamline their activities to avoid the incidence of corruption in the future,” the statement stressed.

The longstanding calls for the Tamale Stadium to be named after the late Vice President Aliu Mahama bounced back to the fore at the conference.

The group took its plea to President Nana Addo Dankwa Akufo-Addo, entreating him to immortalise the longest-serving vice president in the country’s political history.

“Our final request to the President, as a way of adding our voice to the numerous calls in the past, is to name the Tamale Stadium after Vice President Alhaji Aliu Mahama, who had been perceived not have done so much for the Northern Region. Let us honour his memory and leave the rest to posterity,” the organisation petitioned.