what started as a genuine effort by Bank of Ghana (BoG) to correct an error in a company name, has taken a different turn with unscrupulous journalists, setting up an enterprise to blackmail an otherwise lawful business venture, which provides a platform for sellers and buyers of gold to transact their trade serenely.

The business activities of Menzgold Ghana Company Limited, The Herald learnt, has since 2014, been done in a legally acceptable manner, thus preventing fraud and the usual embarrassment brought upon Ghana by scammers, posing as gold dealers and duping foreign nationals by selling them stones and iron bars painted in gold.

Strangely, instead of welcoming the initiative, journalists, officials of the Central Bank, Police officers and competitors, have set in motion an evil web to make money and also to kill Menzgold Ghana, thus throwing hundreds of Ghanaians out of employment.

The company, noted that no amount of explanation and documents shown to, especially the journalists, will make them appreciate the fact that the issue the company had with the Central Bank, had long been resolved with a change of name from Menzbanc Ghana Co. Limited, to Menzgold Ghana Company Limited.

However, the company wakes up daily to see mischief-driven publications by some journalists and media houses, which had earlier approached the company seeking money.

The company threatened to protect its investment by exposing the individual journalists, if they are bent on tarnishing the image of the company with their skewed and mischief-driven stories, adding it has done nothing fraudulent or illegal. Instead, it has operated with the required licenses from a known and well publicized location, paid the required taxes.
In the helm of affairs is the Chief Executive Officer (CEO); Nana Appiah Mensah, a very successful young Ghanaian entrepreneur. He insists he is a law abiding citizen, who is well known.
Mr. Mensah, insisted his Christian upbringing and values are too strong to engage in fraudulent acts to bring shame to his mother and father, who are still alive and well known.
Menzgold’s core business objective, The Herald learnt, is the sales and purchase of gold; a strictly commodity dealership business entity. It does this also by melting the minerals into coins and pellets for easy purchase and transportation rather than selling the mineral in the form of Gold bars.
Management, insists that “the company is not a bank or a Microfinance entity, it therefore does not undertake deposit mobilization as prohibited by Sections 6(1) and 4(5) of the Banks and Specialized Deposit –Taking Institutions Act, 2016 (Acts 930)”.
Menzgold which operates with Ghana’s Minerals Commission license, told The Herald that, it has several times insisted through many publications in the Daily Graphic, Ghanaian Times and Daily Guide that it is not licensed to operate as bank or accept deposits from the public, and therefore finds it strange such claims still persist.
Menzgold said, the Deputy Governor of BoG, Dr. Johnson Asiamah, only told Parliament’s Public Accounts Committee (PAC) a statement of fact last week that the central bank, has not licensed the company to accept deposits, adding the company, has not been taking deposit from its customers.
It revealed how officials of BoG, have helped Menzgold lawyers to even issue disclaimers in some selected newspapers to reiterate the fact that, it is not into the collection of deposits from the public as being speculated.
Management of Menzgold, said the company is a limited liability company, duly registered and incorporated in Ghana, by the company’s Act of 1963 (ACT 179).
It revealed that “the name of the Company used to be known as Menzbanc Ghana Co. Limited, changed to be known as it is today with regards to section 23(1) of the Banks and Specialized Deposit-Taking Institutions Act, coming into force in 2016 (Act 930)”.
23(1) of Act 930 states “Except as otherwise provided for in this Act, a person, other than a company holding a banking licence, shall not hold itself out as a bank or use the word “bank” or any of its derivatives in any language, or any word that sounds like “bank” in the description or title under which that person is carrying on financial services business in Ghana, or make a representation to this effect in any billhead, letter, paper, notice, advertisement or in any other manner.
It revealed “Menzgold Ghana also used to be an affiliate of Swiss Gold Global but ceased to be an affiliate in 2016 thereabout owing to company growth and the need to build an independent corporate brand. The company wields a Ghana Minerals Commission license that permits gold dealership; by way of its sales and purchase from the niche market; sourcing from the licensed small scale miners and the general public for purposes of value addition (refine) and process into finished products, package and put up for sale on domestic market or exports”.
The owner of Menzgold, superintends over a chain of businesses ranging from Minerals explorations, exploitations and exports, oil and gas, real estate, mass media, marketing and security service.
Among his corporate entities are Menzgold Ghana limited, Brew Marketing Consult co. ltd, Cheetah Security Co. ltd, Brew Builders and Planners Co. Ltd, Zylofon Media Co. Ltd, Brew Energy Co. Ltd, Menzgold EspanaS.L (Madrid, Spain) and several others businesses under, T.I.A. Holdings in the United States of America”.
“The company is into the trading (Buying and Selling) of Gold dore bars of fine percentage Purity. With our outermost commitment in sourcing gold from the public and from the mines that conform to the legally acceptable means of gold exploration and exploitation as directed by the Minerals Commission of Ghana and by extension the Environmental Protection Agency (EPA), our gold is sourced from the general public and licensed mines that conform to the laid down rules”, the company said.
It added “we sell to members of the public, who wish to buy, trade and store gold to be liquidated over time for extra value or to be processed into finished products of fine collectibles”.
On its Gold Vault Service, it intends setting up a gold storage facility operated through a Metal/Bullion account in favour of a prospective client.
“A personalized vault is then assigned which is embedded in our main large vault under twenty-four (24) hours man-guard and CCTV Surveillance system. Our Vault System is intended to be utilized by the Company, prospective gold buyers and designated sellers for a limited period only at a fee”, disclosed.
“By virtue of our Ghana Minerals Commission license, we are able to effect the shipment of gold dore bars to other jurisdictions of the world economy to meet purchase demands. We effect these direct exports, by assaying the gold to be exported in our assaying facility superintended by our competent metallurgists, an assay report is duly issued, signed and sealed”, it revealed.
Menzgold, said its gold “is packaged in a box or several boxes depending on the quantity and sealed with special transaction seal numbers. It’s then transported to the airport, customs department in the company of a well-equipped security. Its then subjected to Ghana Customs procedures and processes for clearance amidst other checks by other state agencies like Narcotic Control Board amongst others, prior to the final assaying by PMMC at the airport, then the preferred airline takes possession and an air way bill bearing the full name and consignee address is duly issued”. 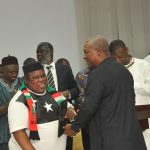