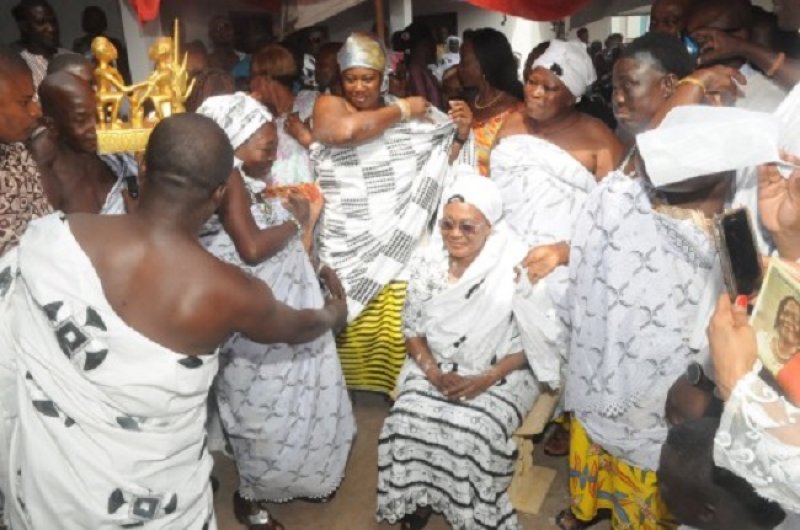 Following this the former General Secretary of New Patriotic Party (NPP), Kwadwo Owusu-Afriyie popularly known as Sir John is said to have reacted to the Queen Mothers Statement saying that they have nothing doing, that is why they are wasting their time on the issue.

Well, this has not gone down well with the Queen Mothers, who are now demanding an apology from Sir John, or as they put it ” he will have himself to blame”.

Addressing a meeting of Queen Mothers in Sunyani on Friday the Akyempem Twafohenemaa of Dormaa, Nana Akosuah Kumi Yeboah further asked Sir john to as a matter of urgency use the same FM Station through which he made the disparaging comments to retract and apologize or have himself to blame. Nana Yeboah said Ghanaians should appreciate the effort President Mahama and the Bank of Ghana are making to get victims of the Micro Finance scam their monies back.

She entreated the public not to politised the DKM and Micro Finance Companies problem.

Nana Yeboah further warned the Member of Parliament (MP) for Nkoranza North, Major Derek Oduro and other Colleague MPs to refrain from comments against the First couple and the Bono-Ahafo Queen-mothers Association.

The Meeting which was held in Sunyani had hundreds of Queen mothers from all the 27 districts of the Region present to protest against Sir John’s comments against the Queen Mothers.

The event was characterized by the usual singing of war songs and praises to the First Lady and President Mahama as well dancing to live band music.

It would be recalled that at their first meeting the Queen-Mothers of Bono-Ahafo issued a weeklong ultimatum, starting from the 15 of January, to the person behind the untruths about the First Lady, to own up or produce the recording of the First Lady endorsing DKM, or risk getting cursed.

They maintained that they are taking this course of action because the First Lady, who is the Sompahemaa of Nkoranza is part of the Queen Mothers Association, thus they would not allow a member of the Association to be treated unfairly without intervening.