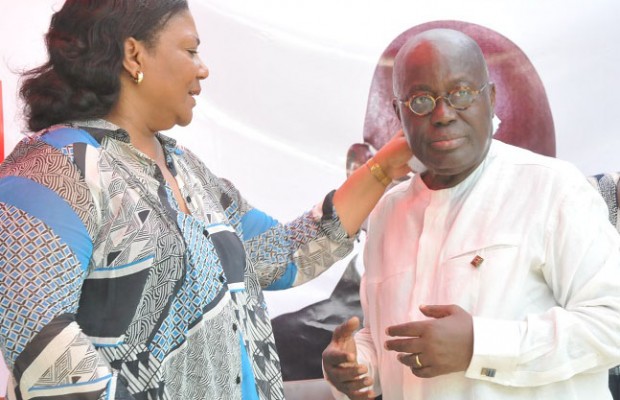 wonder who advises the Akuffo-Addo family but really, whoever it is has got to be fired immediately. Because they are doing the family no good at all in Nana’s quest to become president. Goodness me. Whoever advised Auntie Rebecca the best way to win votes for her husband is to come out to criticize the government. The only people she pleases doing that are the same people who would vote NPP anyway.

I’m still baffled why the NPP do not realize, that the only way to win an election in Ghana is to turn the few floating voters to their side and even make efforts to get some usually NDC voters to make an exception for a particular year and decide to vote for Nana.
Ghanapoliticsonline.com

Of course Rebecca can help her husband, but the best way to do that, as a potential First Lady, is not to make incidiary political statements that turns off about half the population of Ghana. A First Lady-in-waiting should be visible, but she has to be seen as a potential mother of the nation and not just another political lout subjecting herself to insults and ridicule.

Nancy Reagan, as the wife of Governer Reagan between 1967 and 1975, and later as a presidential candidate and then president, never uttered a negative word against political opponents. She left that kind of work to the politicians. Instead, she got absorbed in “The Foster Grandparent Programme” which enabled seniors to interact with and support young children, thus acting as foster grandparents. The programme’s goal was to provide “grandparents” who would give emotional support to victims of abuse and tutor, mentor, and care for children with disabilities. Later as First Lady, she got actively involved in the “Just Say No” campaign to try to turn the youth away from drugs.

Michelle Obama launched the “Let’s Move” campaign to try to reduce childhood obesity. Childhood obesity is neither a Democratic Party or Republican problem. It is a national problem that many parents could identify with.

So, rather than making the odd speech criticizing the government, she could take up an interest in for example, the welfare of pregnant women in the country. This would be a course that cuts across NPP and NDC. She could dedicate herself to visiting pregnant women in hospital, launch campaigns to encourage rural women to attend Antenatal Clinics etc. People would look at all the effort Auntie Rebecca is putting in to help people even as the wife of the opposition leader and the goodwill she would whip up for her husband would be worth a few votes.

So Auntie, rather than attempting to do your husband’s dirty work and making enemies for yourself, help him by staying neutral and continue to present yourself as mother to all Ghanaians.