The leader of the Association of Ten Virgin Pastors has described as ‘unfortunate’ claims by Dr. Paa Kwesi Nduom that the ruling NDC rejoiced over the death of former President John Evans Atta Mills.

Apostle Antwi who is also the leader of the End Time Apostles Outreach Ministry indicated that, late President Atta Mills was a gift from God therefore it will not be appropriate to involve him in what he describes as “dirty politics”.

Apostle Antwi’s comment follows a demand by Dr. Nduom that the Mahama administration and the governing NDC publish the late president’s autopsy report to prove they had no hand in his death.

The PPP founder and flag bearer at a rally in Cape Coast had said some NDC officials put on a public show of sorrow with Prof Mills’ demise but privately rejoiced over his passing, saying it had paved the way for their electoral triumph in 2012.

He told the crowd at a rally held on Thursday September 15: “Mills was our kinsman and he became the president. Some people criticized and attacked him until he died. And some of the NDC people themselves thanked God that Mills died. Is that not strange? And after his death they came back here to tell us to replace him with another person from the Central Region.”

“After all that, they go about provoking us that if Mills had not died, the NDC wouldn’t be in government today. … It appears as though they deliberately pushed him from the seat so they can commit the wrongs behind him.”

However, Apostle Antwi who believes late President Mills is now resting in heaven warned of dire consequence if Dr Nduom continues to drag his [Mills] name in the mud.

“I don’t joke with late President Mills at all and so these political leaders should allow him to rest. He was chosen by God to lead us and so if he is no more, then I suggest we let him rest and stop dragging him into the mud of politics” he stated. 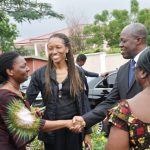