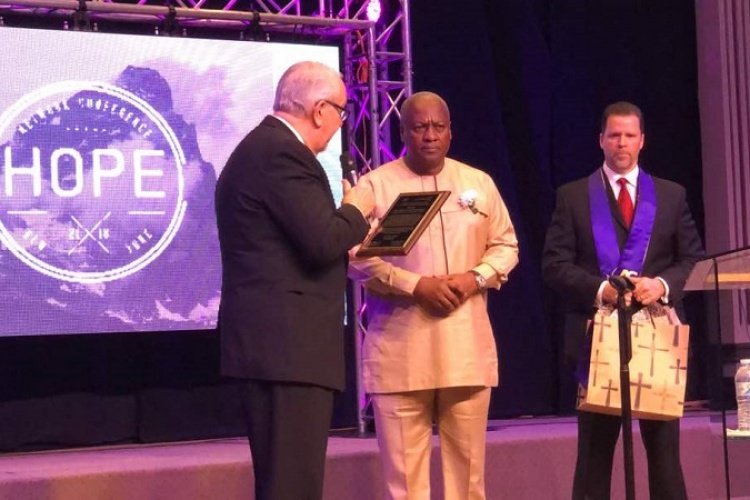 A citation from the Superintendent of the New York Ministers Network of the Assemblies of God Church, Dr. Duane Durst, recognised President Mahama for his exemplary achievements in presidential office, acknowledging “the great achievements in the nation of Ghana and West Africa due to his commitment as a servant-leader to build a just, prosperous and technologically developed nation for the people of Ghana.”

Mr. Mahama is recognised as the first member of the Assemblies of God Church worldwide to rise to the highest office of President and according to the Church he did not only fulfil his duties of leadership with high integrity and deep humility, but also a “bold declaration of his faith in our Lord and Saviour Jesus Christ.”

Mr. Mahama who was a Special Guest at the 64th Conference of the Network in Amityville, Long Island in New York thanked the Church for the award, emphasising that the Church has over the years guided and provided him with the strength to carry out his activities.   “The church has been supportive all through, especially after my electoral loss in 2016”, President Mahama told the Conference.

He also thanked the New York Ministers Network for the invitation to share his perspectives of leadership with the Church, and recalled the centennial celebration of the Assemblies of God Church in Missouri in 2014, to which he was also invited as a Special Guest.

Related Items:
Share
Tweet
Share
Share
Email
Citi FM to boycott NPP events over assault on journalist
FABRICATING AND DISTORTING HISTORY IS TERROR OF DIFFERENT NATURE – J.B. DANQUAH IS NOT AMONG FOUNDERS OF THE U.P TRADITION
To Top