Former CEO of the Ghana Health Insurance Authority, Mr. Sylvester Mensah, who has expressed interest in leading the National Democratic Congress into the 2020 general elections, says decision by the party’s regional chairmen to back the candidature of former president Mahama was unnecessary.

He was however emphatic that the move would not affect him or any person’s decision to contest the party’s presidential primary.

About five bigwigs in the NDC have made their intention to run on the ticket of the opposition party as its presidential candidate for the next general elections known.

But after a meeting with the former president, John Mahama, whom many have tipped to stage a comeback after the defeat in 2016, all the ten regional chairmen of the party signed a communiqué, asking Mr. Mahama to accept a request by the party’s numerous supporters to run again.

Commenting on the issue, Mr. Sylvester Mensah told TV3’s News360 on Friday that the decision was “totally unnecessary, completely avoidable, it does not help [the party’s] democracy”.

Former president Mahama issued a statement on Friday to indicate that the call on him was “premature” when there are other issues like the reorganisation of the party that should preoccupy members of NDC.

Some outspoken members of the party have asked the leadership of the NDC to sanction the ten regional chairmen, suggesting that their decision could hurt the party that is trying to reorganise after an abysmal performance in the last election.

But Sylvester Mensah would not directly take a position on that and deferred any decision to the leadership of the party.

However, he had earlier, stated that “we can forgive for some of these errors and move on as a family”. He was of a firm conviction that even if all the 275 constituency chairmen made that move, it would not “affect anyone’s decision to contest”.

“We could just overlook this and move on, no need to crack bones and fight over some of these things, we need to move on,” he said.

He insisted that the reorganisation of the party, especially at the branch level, should be the interest of all party supporters. 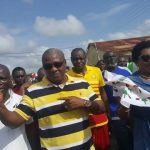