Minister of Power Dr. Kwabena Donkor, shocked residents of Kumasi, the Ashanti Regional capital on Tuesday, when he told host of a radio station to call President John Dramani Mahama and ask him about the end to the power crisis, instead of bothering him.

“If President Mahama says dumsor will be over very soon, why don’t you ask him, am I his spokesman,” an angry Dr. Kwabena Donkor ranted on ASHH FM on Tuesday. The Power Minister also said he does not know about threats issued by neighbouring Nigeria to cut supply of gas to Ghana over unpaid debts.

The incident occurred when a producer at the station placed a call to the minister to enquire about reports in the Daily Graphic that Nigeria Gas Co. had threatened to cease supply of gas to Ghana Gas Co. and the Volta River Authority (VRA), as a result of failure to honour accumulated debts of about $182 million.

An obviously livid Dr. Kwabena Donkor, who is also the Member of Parliament for Pru Constituency, categorically told the producer, named Candy Owusu that, he did not owe anybody and that he was not aware of any threats by their Nigerian counterparts to cease supply of gas to the country.

He, therefore, instructed the host of the show to direct the question to Ghana Gas Co. instead of pestering him with something he knows nothing about. As if that was not enough, the defiant Power Minister also refused to be dragged into the controversy over when the intermittent power crisis will officially come to an end, following a renewed promise by the President, His Excellency John Dramani Mahama, during the commissioning of the Bamiankor Community Day Senior High School in the Western Region, that the crisis would soon come to an end.

Dr. Donkor unequivocally stated that he was not the spokesperson for the President and that he will not be in the position to comment on the statement. Below is the detail of the conversation that transpired between the host of the show and the Power Minister;

Candy: Good morning, Honourable, please we are reading in the Daily Graphic that we owe Nigeria Gas and that they have decided not to supply us gas anymore. Is it true?

Candy: But is it true what the paper is saying that we owe Nigeria Gas, despite you not reading the story?

Dr. Donkor: Who? When you say ‘we’, who? do you owe them?
Candy: No, I don’t owe them but I am talking about Ghanaians…

Dr. Donkor: You don’t owe them, so ask whoever has bought something from whoever you are talking about; I haven’t bought anything from anyone.
Candy: I understand you but Hon. we also understand that Nigeria supplies Ghana gas for powering the thermal plants…

Dr. Donkor: Then ask Ghana Gas….if the Nigerians supply Ghana Gas, why don’t you ask them?

Candy: I thought that this is a very serious issue, and I will not be surprised if you know.

Candy: But have you found out from Ghana Gas since the news broke?
Dr. Donkor: I am saying that I am not aware…gentleman. You keep on saying Ghana Gas, so find out from them.

At this point, the interviewer veered into the never-ending power crisis, known locally as dumsor and sought to enquire when Ghanaians will experience stable power.

Dr. Donkor: So why don’t you ask the President, am I his spokesperson?
Candy: But Hon. He mentioned your name….

Dr. Donkor: Where? When? I haven’t read the paper…I am in the hospital right now!!

The response from the minister has, however, evoked reactions from residents in the Garden City, with some criticizing the minister for running away from his responsibilities. 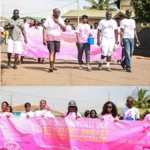