NPP Chairmen for Asawase, Ejisu, Fomena and Ahafo-Ano South East constituencies in the Ashanti Region have been suspended.

Speaking to Joy News’ Nii Akrofi Smart-Abbey, the Ashanti Regional Organiser of the NPP, Stephen Amoah said the action follows petitions against the constituency heads from some party members who wanted disciplinary action taken against them for violating sections of the party’s constitution.

“I think Article 3 (f) says with issues such as what we are experiencing now, the REGSEC of the NPP can actually go ahead and suspend them pending the investigation and the decision from National Executives,” he said.

A member of the New Patriotic Party Abubakar Saddiq was stabbed on Friday at the Asawase constituency in the Ashanti Region in what is believed to be politically motivated violence.

Saddiq was part of the angry Akufo-Addo loyalists who locked up the Asawase Constituency office, Thursday in protest over comments made by the Chairman of the Constituency, Isaac Brenya.

Brenya had called on the 2016 NPP flagbearer Nana Addo to step down. Mr. Brenya himself was in Accra to participate in a demonstration against the party’s decision to suspend its National Chairman Paul Afoko.
The deceased and several other supporters had threatened to beat up Mr Brenya for supporting the suspended National Chair, Paul Afoko and for making comments they thought were derogatory of Nana Addo.
Saddiq was said to have gone to the constituency office on hearing the office had been ransacked Friday morning but was attacked and murdered by unknown assailants.

The New Patriotic Party has condemned the unfortunate incident and called for investigations.
Police in the Ashanti region haves arrested six suspects including the Deputy Women’s Organizer of the NPP in the Asawase constituency.

According to the Ashanti Regional Organizer of the NPP the suspension of the Chairmen is related to the recent happenings in the region.

“The petitions say that the suspend chairmen have not complied with the party’s decision,” he stated.
Ha added the suspended chairmen will have an opportunity to state their case before the party’s disciplinary committee. 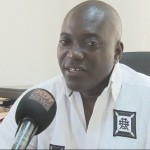