member of the governing New Patriotic Party (NPP), Gabby Asare Otchere-Darko, has described the manner in which serial caller of the National Democratic Congress (NDC), Appiah Stadium, was arrested as unnecessary.

Appiah Stadium was arrested on Tuesday, September 26 by the Ashanti Regional Police to substantiate an allegation he has levelled against Nana Addo Dankwa Akufo-Addo that the First Gentleman of the land smokes ‘wee’ (marijuana).

ASP Juliana Obeng, the Police PRO in the region said he was arrested on Tuesday following orders from their national headquarters in Accra.

But commenting on the development on his Facebook page on Tuesday, September 26 Mr Otchere-Darko said: “These things shouldn’t happen. I can see the President being extremely unhappy about any citizen being arrested for allegedly insulting him. It goes against all that he stands for. I may not be privy to the details but I know whatever the justification, the President will not like this one bit.

“He could have been invited without the handcuffs. Very unnecessary; uncool.” 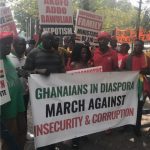