Speaking at a news conference on Thursday, 29 December 2016, he said, “When you have an Attorney General who is a cabinet member and is the most powerful person in terms of fighting corruption, how is that possible in our part of the world that you sit there with your colleague and you are the one who will look at your colleague and say you are a thief, you have stolen money from the state and you have done something against us?
play
Nana Akufo-Addo

Read also: Have we been tricked? – OccupyGhana
“How does that happen? What we are asking for is a separation. Let the Minister of Justice become the President’s lawyer while the Attorney General’s office becomes the people’s lawyer and let’s bring that independence there,” he noted.
As part of Nana Addo’s presidential campaign was about uprooting corruption.
Nana Addo said, “We have decided that as much as possible we want to take the politics out of it.”

He has indicated one of his priorities would be to establish the Office of a Special Prosecutor to deal with corruption.
The move, according to him was intended to separate politics from criminal investigations. 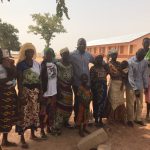