The flagbearer of the All People’s Congress (APC), Hassan Ayariga has said that the APC is the only serious party in the country and therefore should be given the nod in the December polls.

He is of the firm belief that the APC would be re-instated after the court hearing.

The Electoral Commission disqualified Mr. Ayariga because some persons who subscribed to his candidature endorsed other candidates in the race.

But Ayariga said the NCCE failed in its duties to educate electorates well enough hence the mistakes on the nomination forms.

“Given the doubt that whatever the EC said was true, I am coming from the PNC and there are members of the PNC that have moved from the PNC to ignorantly do those common mistakes. It is the duty of the NCCE to have educated the people on how to subscribe. So for us that fault does not lie on political parties but the NCCE, which Charlotte Osei was the former boss.”

Meanwhile an Accra High Court has ruled to abridge the date for the hearing of the APC suit challenging their disqualification by the EC.

But Mr. Ayariga who claims he would accept the verdict of the court, indicated that the only political party qualified to contest in the 2016 elections is the APC which he founded.

Hassan Ayariga posited that, he does not see the other smaller political parties qualifying to contest in the general elections because they cannot meet the requirements of having two-thirds of district offices across the country.

According to him, establishing about 144 district offices in the 216 districts across the country cannot be likened to buying shoes on the market. 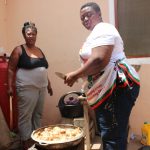