Dr Papa Kwesi Nduom of the Progressive People’s Party (PPP), and Mr Hassan Ayariga of the All People’s Congress (APC)
The All Peoples Congress, APC and the Progressive Peoples Party, PPP have questioned the rationale behind the directive by EOCO asking them to disclose the sources of funding of their political parties and Audited Accounts to the EC.

Radio Ghana finds out from the two Political parties what they make of the directive.

First the General Secretary of the All Peoples Congress, Razak Opoku says the party does not understand why EOCO is asking only the two parties and not the NDC and the NPP as well.

The Policy Advisor of the PPP, Kofi Asamoah Siaw said the party has not yet received any directive from EOCO.

He told GBC’s George Ankrah that if EOCO has a genuine bases for looking for the sources of funding of the PPP it could sought that from the Electoral Commission.

He said the seeming intimidation of the party would not deter it from pursuing justice against political victimization.

Meanwhile a Governance Expert, Prof Baffour Agyeman-Duah has described as puzzling the directive by EOCO to the Presidential candidates of the PPP and the APC to provide it with their sources of funding.

In an interview with Radio Ghana, Prof Agyeman-Duah said he is not surprised that people see the development as witch-hunting though there is no evidence.

Prof Agyeman-Duah said there is no need to cause political tension in the country saying EOCO should have done its homework before issuing the directive.

He said the ideal thing to do is to ask all the political parties to do so for purposes of fairness. 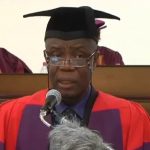