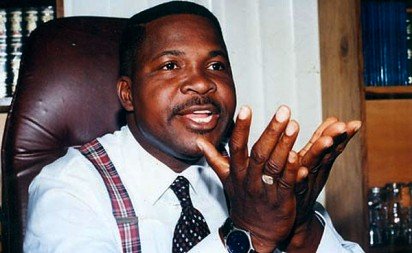 Renowned constitutional lawyer, Chief Mike Ozekhome (SAN), has accused President Muhammadu Buhari-led administration of undermining the rule of law in the polity, adding “that those who may be telling the President to put Nigerians on the stakes and shoot them to death, without even trying them in the fight against corruption are his worst enemies. Fielding questions from journalists in Abuja, Ozekhome maintained that under no guise must respect for the principle of separation of powers which is a sinequa non for democratic rule be undermined under the present dispensation, adding that the President will know those deceiving him when the chips are down.

The rights activist was apparently piqued over refusal by the authorities to respect court orders that granted bail to some accused persons facing trial for corruptly enriching themselves to the detriment of the Nigerian state.

Ozekhome said: “The rule of law so far has been traumatised and put into perpetual retreat. Nigeria has never had it so bad, not in the last 16 years of the new democratic experimentation. Under the Yar’Adua /Jonathan period, you could abuse president Jonathan. People described him as clueless; some politicians even described him as the drunken Ijaw boy. They ridiculed and caricatured Patience Jonathan with her mode and manner of speaking but never for one day did we hear a writer or journalist being picked up for that. We never had cases of disappearance as we had under government before it when people like Harry Marshall, people like Sekibo, great journalists either disappeared or were killed in cold blood. Chief Bola Ige, a whole sitting Attorney general who was formerly Minister of Power was killed in cold blood and till tomorrow we do not have a clue.

“Even if Nigerians were hungry, Nigerians enjoyed one thing in the last administration which was respect for fundamental human rights. I am afraid that under the present government of President Buhari, the rule of law is being observed more in breach than in compliance.

“When the court of law has decided a matter under the doctrine of separation of powers, the court of law has the duty to adjudicate between persons, between government and government and between citizens and government under section 6 of the constitution. Once they have made that pronouncement, never would the executive under section 5 headed by Mr. President which execute laws made by the National Assembly under section 5 of the constitution nor the legislature which is bicamerally controlled by the Senate President and the Speaker of the House of Representatives, none of them has the power to tell a court of law that the bail you have granted we are not obeying it because of that hallowed doctrine of the separation of powers.

“Under section 88 and 89 of the constitution for example, the National Assembly has oversight functions over the executive. They can call Ministers, departmental heads, and heads of organisations and say come and answer such questions. That is the doctrine of separation of powers and counter balancing at work. Under the same doctrine, that same National Assembly can pass a law and the law is challenged up to the Supreme Court and the court strikes out that kind of law and say the law was illegal.

“That is counter balancing to ensure that no one arm of government is so powerful as not to be subjected to check and balances. In the same manner, the National Assembly whose law can be struck down by the court on the basis that it is unconstitutional can also amend a law later to override the decision of the Supreme Court as they did in the onshore/offshore oil case. So the Supreme Court can decide a matter today and the National Assembly amends the law by removing or rendering null and void that decision.

“That was what the National Assembly did in section 140 of the Electoral Act. Many Nigerians do not know this. The often-cited case of Amaechi Vs Omehia was quietly and silently removed by section 140 of the Electoral Act. That was a decision of the Supreme Court where in the lead judgment, Justice Oguntade said the votes at the end of the day belongs to the political party and not the candidate and since Amaechi had won the primaries against Omehia, only him would be entitled to enjoy the governorship even though he never contested because at the end of the day the votes belongs to the political party.

“That was a terrible wrong decision because Amaechi never contested for election, Rivers people never knew him as a contestant, it was only an internal matter which was a quarrel regarding the primaries. But what section 140 of the Electoral Act did quietly was to annul that decision of the Supreme Court by saying that for a candidate to be pronounced winner you must have participated at every level of the electoral process. From the primaries under section 87 of the electoral Act up to contesting the election and up to being declared winner. If it were now, Amaechi case would not have been possible under section 140 of the Electoral Act.

“That is what we mean when we say checks and balances. Each of the arms of government can check each other but not in the way of the President or any other person saying after a court of law has delivered a judgment and set free an accused person on bail, after looking at the various factor for the grant of bail, including severity of the punishment, including the weight of the alleged crime, including whether the accused person would jump bail or not, including whether you would produce surety or not, including whether he has health challenges or not, and the court has finally weighed all these and decided that the accused person must go on bail upon fulfillment of certain condition of bail. When that is done, the government can only do one thing, they can only appeal against that judgment or apply to set it aside.

“But it is not for Mr. President to say such people would not be released on bail because they would jump bail. By so doing, he is making himself a superintendent and overseer and an appellate court over decisions of a court of competent jurisdiction which under a constitutional democracy like ours and under the rule of law can never be possible.”

On the way forward, he said: “The way forward in all of these is we operate a constitutional democracy. And that is why democracy involveS patience; it involves bringing in institutions; respect of decisions by court of law. Democracy is not a 100 meters Usain Bolt or Ben Johnson’s quick dash race. Democracy is a marathon race that requires perseverance, patience, settlement, horse-trading, putting together and trying to find a middle course between forces that are centripetal and forces that are centrifugal.

“Democracy ensures that when there are quarrels like this, there is an arm of government, which will adjudicate. The opinions of the lawyer do not matter. Like justice Cardozo once said that ‘the prophesy of what the court would do are nothing more pretentious’, is what I mean by law. Law is not just what you are just seeing in the paper until it has been interpreted by a court of law.

“No international community is going to hail us for trampling on human rights in the name of fighting corruption because they even respect the rights of their domestic animals let alone human beings. Those who may be telling the President that oh! You are fighting corruption, put Nigerians on the stakes and shoot them to death, don’t even try them! They are deceiving Mr. President. When the chips are down, Mr. President would see that those were his greatest enemies. My advice to Mr. President is that he must obey rule of law; he must ensure that various security agencies respect the fundamental rights and liberties of Nigerians. He has no option; he cannot overrule a court of law.

On whether there is need for extra judicial measure to fight corruption, he noted: “You don’t use any extra judicial measure in a democracy. Even when the military used it, how did it end? When Buhari was Head of state, he jailed some people for 550 years, 300 years, how did that in any way curb the corruption. He started the war against indiscipline when they were flogging Nigerians by the bare buttocks, how did that help? No, you don’t govern by crudity, you govern by persuasion.”