The Africa Centre for Energy Policy (ACEP) has described as “unnecessary and premature” government announcement of an end to load shedding.

According to its Executive Director, Dr. Mohammed Amin Adams, the Power Ministry just wants to play to the gallery and take credit which does not exist.

The announcement comes two days before the January 1 2016 deadline given by the Power Minister, Dr Kwabena Donkor.

This has generated mixed feelings among the citizenry with many skeptical about government ability to keep to its promise.

In his view, the energy crisis is not about generation capacity rather the financial capacity by government to be able to buy light crude oil to power the thermal plants.

The ACEP boss added that, until government is able to secure the needed funds to buy the light crude, load shedding will still persist.

“Maybe the announcement is to an end to the four year old load shedding but load shedding as a phenomenon will always exist” he stressed.

Conceding that government deserves commendation for its efforts, Dr. Amin Adams urged them to concentrate more on ending the four-year-long energy crisis popularly known as dumsor. 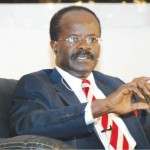