Suspended chairman of the New Patriotic Party, Paul A. Afoko, who lost the last attempt at ensuring his reinstatement through party structures, has given the strongest indication to head to court to seek redress.

The two have begun preparing a writ to challenge the Council’s decision of Thursday night, which is likely to be filed latest by Monday, Mr. Kpebu confirmed to tv3network.com, but declined to give further details.

A unanimous vote by the party’s National Executive Committee on October 23 indefinitely suspended Mr. Afoko and made his first Vice Chair, Freddie Blay the acting chairman; a decision that been challenged by Mr Afoko and some party members.

After back and forth, Mr Afoko on Monday appealed the decision of the NEC at the National Council level stating constitutional breaches as the basis of the 14-paged petition, which prompted the highest decision-making body of the party after congress, to meet over the matter Thursday afternoon.

After a long deliberations, the Council concluded the decision of the NEC should remain until further notice.

“The decision was by voting; one dissenting, six absentia, and 70 votes in favour of the motion to affirm the decision,” General Secretary Kwabena Agyei Agyepong announced at the end of the marathon meeting attended by former President John Kufuor and flagbearer Nana Addo Dankwa Akufo-Addo.

Most of the members came out of the meeting in a jubilant mood with some of them dancing as a sign of victory for the party on the issue, which has in the last weeks, deepened the cracks within the party’s rank and file, our correspondent reported from the party’s headquarters

Sources within the Council revealed that Mr Afoko’s petition was nearly rejected by the Council because it was not duly signed by him. His lawyer was said to have been the one who signed; something some of the members were not happy about. 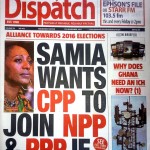