Some Ghanaians have taken to social media to condemn Reverend Isaac Owusu Bempah, the founder and leader of the Glorious Word Power Ministry, for some prophecies he made at his church on the night of 31st December.

In what has become an annual ritual, Owusu Bempah, on Saturday, gave 17 prophecies of major events that will occur in the country this year.

Claiming he had received revelations from God, he prophesied that a former president, a former first lady and some members of parliament would die in 2017.

He also predicted that a terrorist attack and a military coup would occur this year.

The spate of negative predictions did not go done well with many Ghanaians who took to social media to condemn Owusu Bempah as a “prophet of doom”.

Owusu Bempah has faced criticisms over the years for his controversial prophecies, but the reverend has remained unfazed.

Most of his prophecies have simply failed to materialise, although he has claimed success for predicting the deaths of entertainment celebrities in the country.

His popularity has skyrocketed in recent days after he successfully predicted that Nana Akufo-Addo of the New Patriotic Party (NPP) would win the December 7 presidential election.

Owusu Bempah appeared so sure of an Akufo-Addo victory that he challenged members of the public to burn down his church if the prophecy failed.

After Akufo-Addo won, the president-elect thanked the controversial reverend in his victory speech. 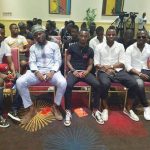