Counsel for some of the judges implicated in the judicial scandal has described investigative journalist, Anas Aremeyaw Anas as one of the most lawless people in the world.

A livid John Ndebugri believes that it is a blatant abuse of the law for the ace investigative journalist to premiere the much anticipated video on judicial corruption despite an application injuncting the showing of the video.

Tiger Eye PI, the investigative company headed by Anas, broadcast the documentary on judicial corruption at the Accra International Conference Centre on Tuesday.

Thousands of Ghanaians trooped to the venue to view firsthand the explosive content of the documentary which shows judges allegedly collecting bribes to subvert justice.

But John Ndebugri on Asempa FM’s Ekosii Sen programme Wednesday said the premiering of the documentary is an act of “lawlessness and impunity”.

He could not fathom why people are hailing the investigative journalist and acting as if “only this 30- year- old Anas who will come to salvage this country”.

The legal practitioner added that those who “ignorantly” trooped to the Conference Centre just to satisfy their curiosity are all in contempt and could be jailed for flouting the law.

John Ndebugri believes “we are in very abnormal times” because the constitution and the law since Anas’ exposé is being turned upside down. 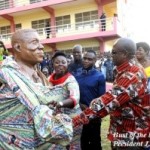