Former National Chairman of All Progressives Grand Alliance, APGA, and candidate of the party in the Anambra Central senatorial district election, Chief Victor Umeh has urged stakeholders in the court ordered fresh election to respect the order excluding new candidates in the fresh contest.

Umeh, who addressed newsmen in Lagos, yesterday, said, it would be an unnecessary legal jeopardy for a fresh candidate to be submitted given the ruling of the Court of Appeal on the earlier election, which he said, was consistent with earlier rulings by the Supreme Court.

He spoke in the wake of the defection of former Senator Uche Ekwunife from the Peoples Democratic Party, PDP to the All Progressives Congress, APC.

Insisting that he was ready to face any challenge from any legally recognised quarter, he nevertheless frowned at anattempt to compromise the court’s decision, which he affirmed, ruled out Ekwunife and the PDP from contesting in the fresh election as ordered by the Court of Appeal.

The Court of Appeal in Enugu had on December 7, 2015, removed Mrs. Ekwunife from the Senate, holding that she was not validly nominated by the PDP for the election. The court consequently ordered the Independent National Electoral Commission, INEC, to hold fresh election within 90 days.

“I am ready for the election again but the important thing to consider now is the need to do everything according to the law. The previous election was nullified because somebody took part after not being properly nominated by her party, the PDP.” 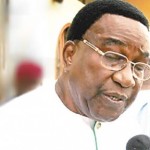