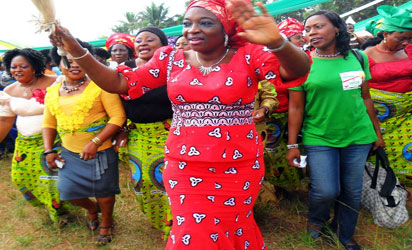 Recall that Ekwunife, who was inaugurated as senator in June, 2015, had her election nullified by Appeal Court in Enugu on December 6, 2015, on grounds of irregularities. The court ordered the Independent National Electoral Commission (INEC) to conduct a fresh election in the zone within 90 days.

Ekwunife, who has begun preparation for the repeat poll confirmed her defection in a statement.

She said: ”Today, I officially joined the All Progressives Congress (APC).

”You will recall that the election which returned me as your Senator was mischievously cancelled. The reason which the court adduced was that I was not duly and legitimately nominated as the PDP flag-bearer for Anambra Central Senatorial election in 2015.

‘I also wish to let you know that a Federal High Court Abuja has Prior to this judgement upheld my candidacy in a suit filled by Chief Sylvester Okonkwo challenging the validity of my candidacy.

”But then, even if I were not the valid candidate, the right thing for the court was to declare whosoever came second in the PDP Primaries as the authentic candidate and thereby replacing me as it is purely a party matter.

”But the court which was Father Christmas granted Victor Umeh what he did not pray for, as his prayer was for the court to declare him winner of the election.

‘The court which has before it enough evidence that Umeh lost went ahead to nullify the election on the basis of what they called invalid primaries of the Anambra State PDP. A reason which is not strong enough to cancel the election in an appeal filled by APGA and Umeh as other political parties also contested in the election.

”My good people of Anambra Central, the outcome of what we witnessed was a conspiracy between some elements in PDP and the State Government who were panicking over what they referred to as my rising profile.

”I am focused and my major concern is to bring back the dividends of democracy to my people. These I have done so far by

i. Being the first woman to be appointed the Chairman of the Senate Committee on Petroleum Downstream.
ii. Sponsoring, moving and leading many Bills and Motions on the floor of the Senate among which is the motion on FLOOD AND EROSION DISASTER IN AWKA, ISUANAOCHA, OBOSI AND OTHER COMMUNITIES IN ANAMBRA CENTRAL.
iii. I also influenced and led the Senate Ad hoc Committee to Anambra State to see and have a first hand touch of what my people are experiencing.
iv. Partnering with the Federal Government to ensure adequate supply of petroleum products
v. Assisted Seven youths to gain employment in the Federal Service since I became a Senator six months ago.
vi. Among others quite numerous to mention here.

”Even after these minor setbacks, I advised PDP to conduct primaries in other to produce a candidate who will fly the party’s flag in the oncoming repeat election, but since then, nothing meaningful has been done as they are busy creating more confusion in the party. A confusion which will lead the party nowhere.

”My good people of Anambra Central Senatorial District; taking cognizance of these developments, I took time to make wide consultations and have decided to join the All Progressive Congress (APC).

”We Ndigbo cannot continue to be relegated from the national bargain which we are co-owners. This is the time to join forces with the Federal Government to move our country forward.”