A Deputy Communications Minister has dismissed a claim by a former Attorney-General that the president stopped legal proceedings against a businessman who is to refund GHC51 million to the state.

Felix Kwakye Ofosu said this claim by Martin Amidu is nothing more than ‘recycled propaganda of the opposition New Patriotic Party’ (NPP) bent on tarnishing the President’s image.

Alfred Woyome was back in the news this week after news broke that the Attorney-General will no longer question the NDC financier in court over the five-year-old scandal.

The news has once again raised questions about government’s commitment to retrieve the unlawfully paid monies even after a court has ordered it to do so more than two years ago.

Pressure group, OccupyGhana in a statement released this week lamented about the matter, describing the attitude of government as lethargic.

“It is clear to us that this government and its Attorney-General are either scared of Woyome or do not have the moral courage to pursue him for our money,” the statement said.

Mr Amidu, who played key role in getting the Supreme Court (SC) to order government to retrieve the money, has filed an application at the SC to examine Woyome himself.

He claimed President Mahama is to be blamed for the withdrawal of the application because Mr Woyome has threatened to expose some key government officials.

But the deputy Communications minister was emphatic that “for the avoidance of doubt, Mr Martin Amidu’s claim is gratuitous falsehood”.

Kwakye Ofosu said the former A-G is far removed from the corridors of power to have access to any relevant information on the president’s directives on the matter.

“He left government four years ago [so] how do you get up, stand on radio or issue a statement and say the president is being blackmailed,” he said on Joy FM/MultiTV’s news analysis programme Newsfile on Saturday.

Contributing to the show, Mr Amidu who has earned the accolade Citizen vigilante for his anti-corruption posture said if the A-G was interested in retrieving the money it would have called for an adjournment of the application and not discontinuance.

Mr Kwakye Ofosu cited a letter dated October 27, 2016, in which counsels for the embattled businessman pleaded with the A-G to recall the application for a meeting to be convened for the settlement to be discussed.

Although he believes the length of the matter has created the impression that government is not interested in retrieving the money, he said President Mahama has given no such directive for the application to be withdrawn.

“It is not true that government has not taken any action,” he said, adding the bank account of Mr Woyome worth $100,000 has been garnisheed by government. 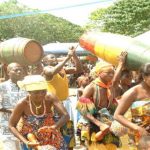