ABUJA—The   Supreme Court will today, deliver judgment on the appeal seeking to quash the 13-count charge the Federal Government filed against the Senate President, Dr. Bukola Saraki, before the Code of Conduct Bureau.

The judgment will be delivered by a seven-man panel of Justices of the apex court, led by the Chief Justice of Nigeria, CJN, Justice Mahmud Mohammed.

The government had, in the charge it filed before the CCT, alleged that Saraki tampered with the assets declaration form he filled prior to his emergence as the Senate President.

He was said to have  deliberately manipulated the assets declaration form by making anticipatory declarations.

Aside the allegation that he operated a foreign bank account while in office as a public servant,  Saraki was also accused of acquiring wealth  beyond his legitimate earnings.

All the offences contained in the charge were said to have been committed while Saraki held sway as the governor of Kwara State.

Nevertheless,  Saraki, through his team of lawyers led by Chief J. B. Daudu, SAN, went before the apex court to challenge the competence of the charge which he said ought to be quashed for want of merit.

Relying  on the provision of  Paragraph 15(1) to the Fifth Schedule  of the 1999 Constitution, as amended,  Saraki maintained that the Justice Danladi Umar-led panel of the CCT was not legally and properly composed to try him.

He argued that a two-member panel of the  CCT that has been presiding over the case against him fell short of the constitutional requirement.

Moreover, Saraki contended that the CCT, not being a court that is constitutionally equipped with criminal jurisdiction, lacked the powers to dock him on the basis of the 13-count charge.

Besides, it was his  argument that the fact that there was no substantive Attorney-General of the Federation as at the time the charge was filed, rendered it incompetent.

FG, through its lawyer Mr. Rotimi Jacobs, SAN, however, urged the apex court to dismiss Saraki’s appeal for want of merit, insisting that it  has established a prima-facie  criminal case to warrant the prosecution of the Senate President before the CCT.

Urging the apex court to direct the appellant to go and clear his name before the tribunal, FG relied on the provision of section 4(2)(b) of the interpretation Act, to contend that Saraki was properly charged before the CCT.

It will be recalled that a previous panel of the apex court headed by Justice John Fabiyi, who is now retired, had in a ruling on November 12, 2015 suspended further hearing on the case pending against Saraki  before the CCT.

The Justice Fabiyi panel which was disbanded by the CJN, specifically directed the CCT panel to “tarry awhile”, to enable the apex court to hear  Saraki’s appeal.

Saraki  had in his six grounds of appeal,  prayed the  Supreme Court to set-aside the majority verdict of the appellate court panel delivered by Justices Moore Adumein and Mohammed Mustapha on  September 30, 2015.

Alternatively, he wants the court to uphold the dissenting verdict of the third member of the appellate court panel, Justice Joseph Ekanem, who not only voided the 13-count criminal charge before the CCT, but also discharged  him.

He is praying the apex court to evaluate the split judgment of the  appellate court with a view to determining whether or not the charge pending before the CCT ought not to be quashed. 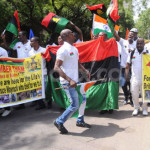