President Nana Akufo Addo has stated that in his quest to get the right people to work in his government, all appointment will cease in May 2017.

Currently, Nana Addo has appointed 110 ministers including deputies ministers with a justification that the problems facing the country; persistent decline in the agricultural sector, low growth rate, major issues of corruption and leakage of revenue, demanded bold and ambitious measures to address.

Speaking on GTV days after appointing the 110 ministers, Nana Addo noted that “I’m aware that people are concerned about what they see as maybe the cost of this large government, it is a necessary investment to make for the rapid transformation of this country”

He added that “We have a problem and what is the best way? It is better to have men and women capable of serving the nation’s interest and work to grow the economy. If I succeed, you will soon find out that the brouhaha is nothing, compared to the success.”

However, speaking to the National Council of the ruling New Patriotic Party early this month, President Nana Addo assured that the remaining government appointment will be completed by the end of May 2017. 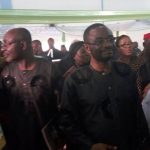