The police have arrested all the five suspects who attacked the Kwabenya Police Station last week and freed seven cell inmates, the Public Affairs unit of the Ghana Police Service has announced in a statement.

The statement, signed by ACP David Eklu, says the suspects were arrested in Kasoa in the Central Region in the early hours of Saturday, January 27, 2018.

The police gave the names of the suspects as Kofi Seshie,28, Sarba George,23, George Asante,33, Theophilus Banda and Elvis Owusu, 31, were arrested at Kasoa Saturday, a police statement noted.

“Kofi Seshie is believed to have shot and killed the Police Inspector. All five suspects were arrested by the Accra Police Command in the early hours of today Saturday 27th January,2018,” the said.

It added: “This brings the number of arrests in the Kwabenya incident to 11. Six persons were arrested earlier this week, three of whom were re-arrested fugitives and three accomplices who facilitated th attack.” 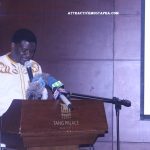