Customs Excise and Preventive Service (CEPS) officials undergoing training on how to use the supposedly new Single Window software being introduced by Nick Danso’s Ghana Link Network Service Limited with its overseas partners, CUPIA Korea Customs Service (UNIPASS) have revealed that the supposedly new and superior system is same as portions of the ones being used by GCNET and West Blue for the same Single Window operations.

The CEPS officials join the tall list of relevant stakeholders that have described as a scam the claims that the UNIPASS system is a superior one and therefore it deserves the controversial 10-year sole-sourced contract that it signed with the Trade Ministry on the blind side of Parliament and Cabinet.

They warned that the untested UNIPASS system when deployed will erode the successes chalked so far at the port as a result of the ongoing paperless port policy, adding that the Government of Ghana stands to lose millions of dollars at the port.

“During the UNIPASS training at the Hotel Majorie in Tema, it became evident that the UNIPASS system looks exactly like a portion of what we have been using all these years.

In fact, it is the same system they have only taken a portion of the existing system and they are training us on something that we already have been trained on. If you dare talk, you would be transferred so we are dancing to the tune of the drums they are playing”, one of the CEPS officials at the UNIPASS training noted.

Many of the participants were of the opinion that Ghana Link and its overseas partner, CUPIA Korea Customs Service tricked the government to believe they had a superior system and were subsequently awarded the 10-year sore-sourced contract.

In 2018, the Ghana Institute of Freight Forwarders (GIFF) raised the same red flags against claims that the UNIPASS system being new and superior when the company called stakeholders to demonstrate its supposedly new system.

In 2020, UNIPASS has brought up the same system claiming it is superior.

As at last year, investigators started a probe into suspicions that the Single Window software that belongs to the government of Ghana had been plagiarized and was being sold back to the same government of Ghana at an amount of $180 Million through a 10-year sole-sourced contract on the blind side of Parliament and Cabinet.
The probe became necessary after it emerged that the supposed newly built and superior software with which Ghana Link Network Service Limited with its overseas partners, CUPIA Koria Customs Service (UNIPASS) was to operate the Ghana National Single Window and Paperless Ports, is no different from the existing systems already being operated by West Blue and GCNet.

Shockingly, the website of the supposedly newly built and superior system being brought by UNIPASS displayed “Ghana’s Trading Hub”, a facility that was built by West Blue for the government of Ghana.

The website also had posters and artworks of the “achievement of paperless ports so far…” which was designed by the Office of the Vice President in early 2018 based on the works of the existing operators.

A few days after the alarm was blown, the website was taken down.

The suspected cloned system which has been re-named the Single Window and Customs Management System (UNIPASS) is what has been sold back to the government of Ghana for $180 million through an intriguing deal spearheaded by the Ministry of Trade. 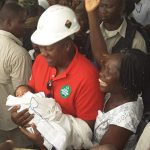