The Director of Operations of Alan Kyeremateng’s 2024 campaign, Hopeson Adorye, has sharply been condemned for publicly stating that that northerners who represent the Dombo side of the New Patriotic Party (NPP) tradition are only fit for running mates in the party.

While addressing a shambolic walk held in Kumasi dubbed a “Walk for Alan’’ over the weekend in a video trending on social media, he allegedly made the gross mockery of Northerners’ status in the NPP.

In trying to convince NPP members to vote for Alan, Mr. Adorye said the Dombos are always in the mix and fit as running mates to either a Danquah candidate or a Busia candidate, urging that, that tradition must continue.

But he has come under fire for making such “derogatory comments.”

A member of the NPP, Musah Superior, for instance, described the comments by Mr Adorye as divisive, calling on him to retract his remarks and apologize to Northerners.

Musah Superior said in his statement: “I call on Mr. Adorye to retract his divisive, despicable and derogatory remarks on Northerners and render an unqualified apology to all NPP members of northern extraction and to the party largely.”

According to Musah Superior, every Presidential candidate aspirant of the NPP should be given equal opportunity and elected primarily based on competence, track-record and ability to re-energize the party to win election 2024.

Below are some of the statements condemning Hopeson Adorye:

Hopeson Adorye’s understanding of the NPP tradition is poor.

I have watched an extract of a speech delivered by Hopeson Adorye in which he made very divisive and ethnocentric comments; labelling Northerners unfit to occupy the number one job of our country.

My understanding is that, Hopeson Adorye is the Director of Operations for the campaign team of Hon. Alan K Kyeremanteng, the Minister for Trade and Industry; and he spoke in that capacity.

My initial reaction was one of horror and pain as a person of Northern extraction in Ghana. Hopeson says that we northerners, (the Dombos) are unfit to aspire to the high office of President of the Republic of Ghana.

Never mind that, a circular was issued only last week by the General Secretary of the Party condemning such political activities meant to canvass support for Presidential aspirants, Mr Adorye and his group arrogantly disregarded the code of conduct issued by the National Council and recommunicated to the the public by the General Secretary and went ahead to organise a health walk in Kumasi on Saturday, 13th August, 2022. This is absolutely unacceptable and totally condemnable!

Mr Adorye’s remarks is sending a certain dangerous message to the Ghanaian people of northern extraction that; we are nothing but second class patriots. Our place in the national political space is to play second fiddle to flagbearers who must either be from the Danquah or the Busia sides of the three distinguished founding fathers of our great political tradition. This is most irresponsible, denigrating, ethnocentric and illogical. It is downright politically suicidal.

Mr Adorye and his likes have a certain sense of entitlement which is difficult for one to fathom with. It’s about time Mr Adorye and people who think like him come to the realisation that they are no more bonafide members of the NPP than any of us. We all belong to the New Patriotic Party equally.

In the run up to the Presidential primaries in 2007, Alan said, he hailed from the Central Region and rightly so! Today, he hails from the Ashanti Region. Is that the newest scam in town? You think so little of the Ashanti Region? Is this not reckless, shamful politics?

In any event, who is the legitimate representative of the Busia side in the upcoming presidential primaries? Hon. Kennedy Agyapong? Hon. Afriyie Akoto? Hon. Kofi Konadu Apraku? Hon. Alan Kyeremateng? What becomes of the aspirations of Hon. Joe Ghartey? He is neither Danquah, Busia, nor Dombo. Does this make him an outcast is one of the most democratic Parties in Africa. This is how nonsensical Mr Adorye’s delusional remarks can be. He should be ashamed of himself.

In the campaign leading to the election of our 2024 flagbearer, the thousands of NPP delegates will be choosing the most suitable person with the required competencies, record and the skills to firstly win the 2024 elections and secondly run our dear country correctly.

All Presidential hopefuls and their supporters must campaign on how they can re-energize our Party’s base and how they can mobilise the Ghanaian people to vote for the NPP massively and stop this TOSH of ethnocentrism.

I call on Mr. Adorye to retract his divisive, despicable and derogatory remarks on northerners and render an unqualified apology to all NPP members of northern extraction and to the Party largely. Similarly, l call on the campaign team of Honourable Alan Kyeremateng to condemn and dissociate himself from this condescending remarks that only goes to weaken our party in the northern part of the country.

The NPP is a mass organisation of Ghanaians of all tribes, clans and creed; it isn’t a property of descendants of Busia Danquah Dombo. This emphasis on tripartite tribal tripod in respect of who leads the party into election, for me, is outmoded.

In any case, who says our country’s predominantly youthful voter population care about antecedents of a political tradition, instead of quality/affordable education and well-paid job opportunities? Stop crude politicking!!

If the party’s flagbearship contest is limited to only the descendants of Busia, Danquah and Dombo, then what signals are we sending to the young and politically active members of other tribes for their immeasurable contributions?

Dye-in-the-wool supporters will buy into this pigeon-hole tribalistic cacophony. But let’s not lose sight of the fact that the generality of Ghanaians care about their daily survival. Why do NPP members lose focus during intra-party contestations?

Breaking the 8 isn’t about the role someone’s forefathers might have played in the formation of NPP; it is about betterment of ordinary citizens’ socio-economic well-being through cogent policy alternatives. That’s where the focus must be.

The enormity of hurdles confronting NPP in election 2024 is clear to even the visually-impaired. Asuch, it will be foolish for any member of the party not to project qualities of our potential leader(s) but dwell on tribal bigotry.

NPP tradition for the many and not for the few

The recent statement by Hopeson raisies several questions. It is an insult to all minorities in Ghana. Several senior members of NPP have argued that their tradition existed before UP …. Western and central regions were key in the formation of UGCC, the antecedent of UP, with Paa Grant who is credited as “the father of Gold Coast Politics” from Western Region as founder and President. Soon it will go to central and western region and or other regions, to show that this tradition *is for the many, not just the few one Senior member of the Party said. 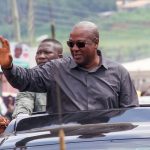