A group calling itself ‘The Movement for Bawumia 2024’, otherwise known as ‘The Bawus’, has challenged the eligibility of Trade Minister Alan Kyerematen, one of the frontrunners in the governing New Patriotic Party’s flag bearer race ahead of the 2024 general elections.

According to the National Chairman of the group, Mr Duncan Opoku Boateng, Mr Kyerematen has no history in the formation of the party.

He was of the view that Mr Kyeremanten cannot claim to be a thoroughbred member of the party.

Mr Boateng explained that there is no history in the party suggesting that any of Mr Kyerematen’s kinsmen played a role in the formation of the party.

He called on the national leadership of the party to take steps to have Mr Kyerematen suspended from the race.

Mr Boateng said this while reacting to a health walk organised by the supporters of Mr Kyerematen in Kumasi in the Ashanti region over the weekend.

He said the late Mumuni Bawumia, together with the late S.D. Dombo, was the founding father of the modern-day NPP, hence the tradition Danquah-Busia-Dombo.

He argued that by this history, it is clear Mr Keyrematen has no history in the NPP.

He said when Mr Kyeremanten lost the NPP flag bearer contest in 2008 to Nana Akufo-Addo, he deserted the party to take up a United Nations appointment abroad.

In his view, the Trade Minister cannot claim to have a history in the party when his late father was nowhere near the formation of the party.

However, Mr Abraham Boadi, a spokesperson for the ‘Alan for President Campaign 2024’, in reaction to the claims from the Vice President’s camp on the same show, reminded the Bawumia camp that Mr Kyerematen was the first person who paid the rent of the party’s headquarters at Kokomlemle in Accra in early 1992.

He said Mr Kyeremanten was the chairman of the Young Executives Forum, an organisation that set out to finance the activities of the party in the early days. 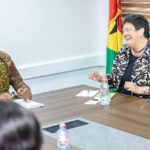