It is emerging that the current leaders of the NPP are not really what they are letting on. If my initial amazement at the appointment of Peter McManu as the campaign manager is anything to go by, things are now becoming clearer for which reason he was so appointed. Remember that Mr. Peter McManu was a substantive national chairman of the party in 2008 when we lost power to the NDC. So much funds had been pumped into the party and it only required a diligent chairman to deliver us the expected victory.

And Lo and behold, chairman Peter McManu drove the party into a painful defeat. As painful as the defeat had been ,some highly placed people in the party had built their family estates out of our collective misfortune.
A plethora of bank accounts were opened to collect cash for the party and up till to today accountability as regards those accounts remain shrouded in secrecy.

Immediately Chairman Paul Afoko assumed office, as part of his New Plan for Power, he made it clear that party funds will be released from headquarters to rejuvenate the grassroots structures of the party. And true to his word ,hundred million old Ghana cedis was sent to all constituencies across the country and a second trunch of one hundred and fifty million old Ghana cedis was also approved to be sent likewise before he was forced out of office. Quite very flimsy reasons were cited for the suspension of chairman Paul Afoko ,including unbacked allegation of leaking internal party secrets. Now that a whole manifesto had been leaked by those who were supposedly behind those secrets leakages, can we ask for heads to roll?

As soon as Chairman Paul Afoko was strangely pushed out, Peter McManu was then subsequently picked as the campaign manager. This obviously confirmed our suspicion that some powerful people materially benefit from our defeat and will do any damnable thing to safeguard their parochial interests in the name of party interest! Otherwise how could it have been that a former chairman who had been so ineffective as to railroad an incumbent party into opposition strangely becomes the campaign manager, especially when he is alleged to have been behind the creation of strange bank accounts used as conduit for siphoning party funds for private gain? There is little doubt that these “party cash entrepreneurs” ganged up against Chairman Paul Afoko to push him out and have a field day once again.

“Adopt a polling station” is their latest arrow in their quiver of financial chicanery! This group have no good record of releasing adequate funds to the grassroots to prosecute party business. It is therefore expected that if there is a genuine basis to mobilise funds for the grassroots at this close time to general election,then that money should be lodged at the party constituency coffers or directly at the polling station. Surprisingly, however, we are now being asked to “adopt a polling station” and send the money to their “self-created” accounts – accounts which are never amenable to accountability. Doesn’t the party have an official account which lodgements and withdrawals of party funds would be readily ascertainable? Don’t these leaders trust the party constituency chairmen to collect proceeds from “adopt a polling station” for onward disbursement? In any event, when did all the polling stations across the country become orphaned as to necessitate their adoptions? If polling stations are to be adopted, shouldn’t their biological fathers(ie polling station and constituency chairmen) be the ones to collect the proceeds directly ?
I am of the firm belief that these “party cash entrepreneurs” are more concerned about their parochial interests than the unity and victory of our great party
#Letswiseup!!! 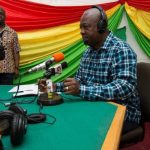