The one year of President Akufo-Addo can best be described as that of “deceitful change”. The President is destroying the image of Ghana for cheap international recognition.

The President’s use of Blomberg’s report to measure his as administration’s performance is a vindication of my position and corroborated by many Ghanaians that this government is spending billions of the tax payers money on media propaganda and projection. It is painful that the President who promised Ghanaians “heaven” has suddenly turned blind eye to the great hardship Ghanaians are going through under his administration. The change he and his party promised is nothing other than one chance change and this has been attested by highly respected international institutions including the world bank, Barclays’ South Africa etc. The country dropped three places in the latest best countries rating. The world bank’s latest report on investment in Africa, rated Ghana very low and was corroborated Barclay South Africa in its latest report on investment. Contrary to the picture the President painted about the economy in his address, the projections the world bank made with regard to growth in our economy is fizzling and fleeing as growth prospects continue to diminish despite the oil. Government mischievously calculate growth in the economy and does its comparison without separating growth in an oil driven economy from a non oil economy. Under Akufo-Addo, multinational companies and private businesses are laying off thousands of workers while contractors working for government have left their site Yet, what the President does is to shower praises on his cousin ( Ken Ofori-Atta) and other nonperforming ministers with his ministers casting aspersion on Ghanaians describing them as whiners and sceptics. Some of the President’s own supporters and his party’s functionaries have started pointing accusing fingers at the his government for its insincerity and lack of compassion. Reacting to the President’s vague state of the nation address, his allies in the spare parts industry, said it is too cruel of this government to continue promising and not fulfilling while pointing accusing fingers at the opposition. The Npp promised Ghanaians heaven, described borrowing as political sin, said we have enough moneys in Ghana to borrow from outsiders, described the stabilisation Levy policy as wasteful.

What are we seeing under their watch? Borrowing and issuing of bonds have become a divine tradition in the administration, the stabilisation levy they spoke vehemently against its implementation has become its head corner stone. Ghanaians voted for them because they claimed there so many ills bedeviling the country and they are capable of curing it of these diseases. They are controlling an oil driven economy and the revenue accrued from our oil this one year is far in excess of anticipation. This reality never reflected in the standard of living of an average Ghanaian. Contrary to all the hype about improvement in our inflation and GDP people are poorer. Dr Bawumia promised was going to arrest the cedi and in fact told he has arrested it, locked it and deposited the cells keys with the IGP. Our exchange rate under this government never fared better as the cedi parity to other currencies worsened and worsening. Corruption and fight against it has become only a media issue for propaganda purposes. Poor budget implementation is one of the woes, they say the economy is improving yet there is no food on our tables. The insecurity is another factor. Crime rate has increased under this administration. Killings including killing of security operatives, armed robbery and electronic thievery have increased.

The President and his party are taking Ghanaians for a ride. Instead of telling Ghanaians the real fact about the economy, instead of fixing what they promised, they are blaming the last administration for their cluelessness.

Yea, economic growth can be expressed in terms of gross domestic product. We must also look at the gross national product to help us in measuring the size of the economy and to enable us compare in absolute and percentage change i.e how much the economy driven by oil has progressed or otherwise since 2015 taking note that 2015 to 2016 oil did not support the economy. What the President failed to do was – looking at the human development index which is the appropriate tool to gauge the development in an economy. 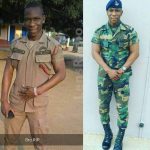