“Akufo-Addo’s family are Money-Minded and Greedy;I no longer sign cheques of the Party, My Focus Is To Become The Next General Secretary”- John Boadu

Details reaching the New Free Press has it that, acting General Secretary of the New Patriotic Party and Director of the 2016 Presidential elections of the NPP, John Boadu has made comments that suggests foreboding, against the performance of the NPP in the upcoming 2016 elections, a source closer to the asylum down headquarters of the NPP has said. An audio recording, which had gone viral on various social media platform had the voice of John Boadu describing the NPP in local parlance as “NPP NO KORAA, S3 3GU DADAA” to wit “The NPP HAS DIED OUT AND NO LONGER IN EXISTENCE FOR A VERY LONG TIME.”

The NPP National organizer John Boadu, according to a deep throat source who spoke on condition to remain anonymous, expressed that, John Boadu has remarked that “considering the ineffectiveness and weakness” of Nana Akufo-Addo as well as the “poor and disappointing” campaign put in place by the party’s twice defeated flagbearer Nana Akufo-Addo, it will take a “miracle” for him to “secure the 50%+1” in the upcoming December 7 2016 general elections. John Boadu is said to have expressed that,  the family of Nana Akufo-Addo are “money-minded, greedy” and only interested in sniffing around for money to “make deep their pockets” instead of supporting the party with those monies. Acting General Secretary John Boadu is reported to have said that, due to the “greedy” nature of Akufo-Addo’s family and how that family “have taken a firm grip on the party’s money”, he no longer “signs cheques, neither he is a signatory to the party’s accounts, and no longer associates himself to anything related to the party’s money.”

Speaking to our news correspondence at the asylum down headquarters of the NPP, a high placed source in the innermost of the NPP flagbearer who happens to be a former Ambassador to an Asian country has bemoaned against the opulence and extravagant lifestyle of the NPP flagbearer’s family noting that, why would Ken Ofori-Atta be “on the streets in search for money instead of campaigning? Look at me, I have seen it all in politics. Politicians in every nook of this world are seen on the streets only to canvass for votes and not begging for money. But what do we see? Ken Ofori-Atta and Gabby Asare Okyere-Darko have never contested any position in this party, neither have both, ever been appointed to any meritorious position in the NPP however, under inexplicably baffling circumstances, these two cousins (Ken and Gabby) of Akufo-Addo will resurface, meander their way through to not only have their firm grip on the huge campaign monies of the party but also provoke attempts to impose their family’s desire on the NPP, whenever it was close to elections. Mysteriously, they will, suddenly after every elections, disappear with the party’s cash and vanish into thin air. That has been their modus operandi”

“I don’t doubt that, Ken Ofori-Atta is the cousin of Akufo-Addo and has since 2007, remain as the director of finance for Akufo-Addo’s campaign team. That notwithstanding, this guy is so money conscious and has since 2007, been craving for money with and from the NPP as if he owns the party. In 2012, Ken Ofori-Atta messed all of us up when he had hoard the millions of dollars NPP had raised from its cheerful giving financiers to the extent that, there was no money to pay for polling agents of the NPP, that was how pathetic it was. What happened in 2013? Didn’t Ken Ofori-Atta collude with some executives under Jake’s administration to use the party’s headquarters as collateral to acquire his personal loan amounting Ghc 2 million, of which he had defaulted payment? Why has the NPP’s standard reduced to such lowest ebb?” the NPP former Ambassador quizzed. 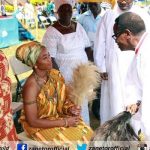