Ex-Member of Parliament (MP) for Asokwa in the Ashanti Region, Maxwell Kofi Jumah, has cautioned Ghanaians on the election of his party’s 2016 presidential candidate, Nana Akufo-Addo, as he will be a “terrible president” in the history of this country.

The former mayor for Kumasi, insisted that it won’t take more than three weeks for a Nana Akufo-Addo led-government to be overthrown through a coup d’état, hence Ghanaians should not look to his direction for a new leader at next year’s polls.

The ex-Asokwa MP, who is seeking a return to Parliament on the ticket of the largest opposition group, the New Patriotic Party (NPP), was captured on what looks like a secret tape recording, making the rounds in the media.

It is not clear, whether the caution has something to do with the raging crisis in the NPP, which has claimed the life of Adams Mahama, NPP’s Upper East Regional chairman and injuries sustained by several party regional executives and aides, as well as the murder trial of Gregory Afoko, younger brother of Paul Afoko, NPP National Chairman.

The maverick politician, is heard in a conversation with an unknown gentleman, shouting on top of his voice that Nana Addo, an ex-Attorney General and Minister of Justice, would not remain on the throne for even three weeks, should Ghanaians do the unthinkable by voting for him to form a government.

It is not known, what triggered Mr. Jumah’s sudden observation because; Kofi Ghana as he is affectionately called, has been one of the apostles of Nana Akufo Addo in recent years, and been out and about everywhere defending the man he now claims would be a “terrible president”.

In September, last year, Mr. Jumah on OKAY FM’s morning show, Ade Akye yen bia declared, “2016 is not for Mahama (President). Nana Addo, must be the President of Ghana. This is Akufo-Addo’s time to be President”.

He is also on record to have said on Adom FM’s Dwaso Nsem with Captain Smart that, he did not know Akufo-Addo was a formidable man. He would have supported him long ago, instead of supporting Alan Kwadwo Kyeremanten, Nana Addo’s bitterest rival within the party.

“Kofi Ghana”, was once a Deputy Minister of Local Government and Rural Development in the John Kufuor regime.

The question lingering on the minds of many Ghanaians is, what has changed to have pushed the loud-mouth politician to finally admit to a view held by Kofi Koomson, owner of a pro-NPP newspaper, the Chronicle, and a personal friend of Nana Addo.

Mr. Koomson, in the run-up to the 2008 general election, warned he won’t be comfortable in the unlikely event that his friend, Nana Addo, is voted as President of Ghana because, “it is not safe” for a great country like Ghana.

“I cannot Sleep. I cannot sleep with Akufo-Addo as President”, Chronicle publisher cautioned in an interview on Radio Gold in 2008.

Mr. Jumah, appears to agree with Kofi Koomson’s assertion with his position that Nana Addo, will be overthrown within days should he become President, since he will a “terrible” leader. 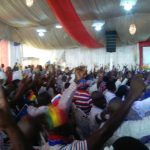