Reports of car gifts, said to have been given to the NPP flag bearer by key NDC figures is stirring trouble within the NPP with some NPP party faithful calling on Akufo Addo to come clean on the matter or resign as the flag bearer of the party.

Sources within the party say a car gift, reportedly a 2016 GMC Yukon XL Denali 4, was given to the NPP flag bearer by Clement Akapam, a top financier of the ruling NDC government.

“We are worried by the emergence of this issue. If the NPP flag bearer can take car gifts from top NDC financiers, then clearly there are questions about his integrity and he is misleading party members. We demand answers from him; he should come clean or resign,” one party insider told the National Pen.

The latest revelation enforces earlier reports about a fleet of cars reportedly donated by Ibrahim Mahama, brother of the president, John Mahama, to the NPP flag bearer, Akufo Addo, sometime back.

“These are troubling times for the party. If the flag bearer can receive car gifts from people supposed to be our political opponents, then clearly the NPP members are being misled. They said the problem was Paul Afoko, Sammy Crabbe and Kwabena Agyepong. They threw so much mud at them and then deceived many party loyalists that the three were in bed with the NDC. Now it turns out that it is rather the flag bearer who has questions to answer,” another party loyalist told the National Pen.

He added; “why would Ibrahim Mahama give the NPP flag bearer a fleet of cars as gifts? And why would Clement Akapam give the NPP flag bearer a car gift. To what end? Clearly, the integrity of Akufo Addo is being called into question and he must respond as there is grumbling among many party loyalists”.
The source recounted how Kwabena Agyapong was wildly and unfairly accused of receiving a car gift from Ibrahim Mahama and which formed a basis for which he was unfairly hauled before the party’s Disciplinary Committee. “Kwabena was forced to produce receipts of the car and in the end it turned out that he had not even finished paying for the car.

That was how shameless and heartless they were, under the inspiration of the flag bearer. Today, the same flag bearer has reportedly been given cars as gifts from NDC big wigs and they want to sweep it under the carpet. No way! The flag bearer has to prove his integrity. He must also produce receipts for purchase of those cars. We have to get to the bottom of the matter,” the source stated.

He said, “when the president was given a car gift, the NPP led the calls for his resignation even though the president had demonstrated openness and added the car to the pool at the presidency. The same standard must be applied here…the NPP has to show some consistency and their flag bearer must disprove the allegations or resign 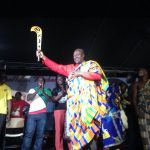