In his 28th August, 2007 public address to Ghanaians, Nana Akufo-Addo stated : “The decision in December is about the choice of a political leader. Running a whole country is not the same as running a ministry of state. It calls for more than efficiency, hard work and good managerial skills. It requires that elusive thing called true leadership. The next President of the republic must have an impressive record of political leadership both domestic and global”. His abysmal performance in government supports the assertion he espoused in 2007. He was seen as a politician with charisma, intellect and populism because of his political activities during the military days. It must be established that he was an Nkrumahist and a Marxist.

He had many intellectual battles (ideological) with his father and uncles who were pillars of the United Party (UP). He became a strong CPP activists and together with his friends, Edusei, J.C Akorsa among others, visited schools across the country to mobilise support among the students front for the CPP. After the 1966 coup, he was among the young CPP activists who were chased by the coup plotters and it took the intervention of his father to free him from that torment. He and late Prof Mills were both “tough” activists of the CPP tradition and both played for the legon football team. He was appointed by late Ohene Djan, who was the Director of Central Organisation of Sports and a top CPP stalwart, as Administrative Secretary of the Real Republikan Football Team. Ghanaians who opposed the regime of Kutu Acheampong develop strong affection for him because of the pressure he and others mounted on the military administration when Acheampong proposed the “Union Government” concept. He and others including late Johnny Hansen, Komla Gbedemah, Obed Asamoah, Jantuah, Nii Armaah Amartefio joined Afrifa to form the People’s Movement for Freedom and Justice. This led to the Yes and No contest. The Unigov idea was proposed by the late B.B Bismarck (Aburihene) who was a close confidant of Gen Acheampong. Nana spoke on many political platforms and made many remarkable statements which attracted many anti- military rule activists to his side. He spoke on BBC and other international media platforms and portrayed himself as a militant politician who wasn’t going succumb to undemocratic moves. He became more popular after the famous Tuffour vs Attorney General case. He led other political groups including the AFC etc to champion his agenda. He was one of the ardent critics of the PNDC administration and constantly attacked the regime on local and international platforms. He was seen by many as a fine and no nonsense politician because of how he presented himself over the years. Some wanted to taste his leadership skill because of how he portrayed himself and his political activities. Many of such persons are quietly managing their disappointment with others losing interest in politics because of what they witnessing under his administration. Those who fed on his propaganda and declared him a flawless politician or a divinely appointed leader, are nursing injuries inflicted on their hearts by Nana’s disappointment. Others who were very close to the man and knew what was behind the mask he was wearing, are smiling in their bedrooms because they knew Ghana will go through this hell under his leadership.
He is gifted with good speech delivery skill and uses that to get the masses hoodwinked. Some of our intellectuals, pastors etc are victims of this phenomenon. They based their judgement and assessment of him on his past political activities and powerful political speeches. Because of his past social life, he has practical understanding of human psychology and he confirmed that assertion in his tribute the late South African musician.

He knows what to tell the masses to calm their nerves, or get them angry. I have never hidden how admired him in the past and how he and others inspired me. I was hoodwinked because of his militant posturing and tough political stance. The question is…is he the Akufo-Addo we knew years ago? Let’s find the answers going forward. His friend Yakubu Alhassan, on the famous “Atta Akyea” tape unmasked his friend when he said “Nana lacks the spirit to check happenings around him”. He said it is one trait undermining the man’s political moves. He supported his point with few examples including how his driver was allowed to disburse party funds recklessly etc. That is the real Nana. Those who have lived with him from his days in Tesano will tell you same thing about him. A generous character who cannot reprimand people around him when they go wrong. Being a militant politicians doesn’t make one a good leader and that was what many who got hoodwinked glossed over causing the disappointments we witnessing. Many of the negatives happening under his administration are against his wish but that unfortunate attitude of “always not wanting to crash heads with his friends and cronies” have left him helpless and rendered him weak in office. That is not leadership.. It is dangerous and can lead to serious national crisis going forward.

Many got attracted to the man’s vision because of what he articulated in the 70s and 90s including alleged human right abuses under the Rawlings regime and massive corruption in the administration. He constantly attacked the PNDC administration on Robbin Whyte’s programme over these allegations and promised his numerous admirers that anytime his tradition gets political power, all such allegations were going to be investigated. Opponents of the PNDC administration rejoiced when he was appointed Attorney General with the hope that hr was going to incarcerate appointees of the PNDC/NDC. The man who allegedly supervised the corruption and killings he mentioned for years is today his inspirer and describes him Rawlings] as the most honest Ghanaian politician in our contemporary times.. Rating him in terms of honesty above his immediate boss President Kufour. He quotes speeches delivered by Rawlings during the PNDC days.. Meanwhile he always described the PNDC administration as an illegal regime. What stops him from investigating the corruption allegations he levelled against the PNDC administration? He was a Marxist and an Nkrumahist and still has traits of the two ideologies in him.

France looked for someone to overthrow Dacko, someone they could partner in their economic ventures in the Central African Republic. On the night between Dec 31, 1965 and January 1, 1966, Bokassa led a the “Saint-Sylvestre Coup”. Dacko was made to hand over power. He launched economic programmes to make his country self reliant same move as (Ghana beyond aid). His relationship with France continued as long as he secured French profits from diamonds and supply of Uranium. Much if not all profits from the transaction went to Bokassa’s pocket. Bokassa the messiah, ruled with a bloody iron fist. He killed and tortured many of his political opponents under true or false accusations of sedition or conspiracies to overthrow him. His thirst for power continued in 1972 when he made himself President for life and gave himself the position of Field Marshal of the Armed forces. Many dictators foster cult of personality, a form of hero worship in which the masses are fed propaganda declaring their leader flawless. This phenomenon is what we seeing under Nana Addo. The media is afraid to criticize his administration, pastors have gone quiet, think tanks etc have all suspended active politicking all because of the culture of silence waves blowing across the land. Workers cannot complain of challenges at their work places, headmasters are being transferred and made to apologise for raising challenges facing the free SHS and most media houses have turned their platforms into praise and worship arena. Some dictators get their positions through legal processes. Adolf Hitler, for example, was appointed chancellor, or head of government, by President Paul Von Hindenburg in 1933. After Hindenburg’s death, Hitler made himself Fuher- a combination of President and chancellor.

The man who promised Ghanaians was coming to end corruption, is shielding his corrupt officials and undermining investigations. Hoodlums have been recruited into our security institutions, hoodlums have taken over our ports intimidating Innocent importers.

The mistakes he constantly makes when quoting figures confirms one scary truth… The man is not in control of his environment, he has lost his fire and being manipulated by people around him. 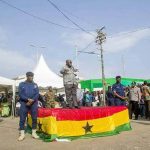 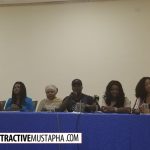