NDC Deputy General Secretary in-charge of Operations, Koku Anyidoho has stated that Akufo-Addo and the NPP will be punished by the electorates because of Kwaku Baako’s Labelling of Chiefs who are endorsing JM as “unwise”.

Speaking on Neat FM this morning, Koku Anyidoho said that his tour with the Chief of Staff, Julius Debrah through towns and villages in the Brong Ahafo Region has revealed that Kwaku Baako has seriously angered the Chiefs.

“I recall Kwaku Baako celebrating his 50th birthday in Japan with President Kufour when the latter was President. So if President Mahama is not using state resources to celebrate the birthdays of journalists abroad but is using the resources to send development to the villages and the Chiefs are thanking him, how dare Kwaku Baako insult the Chiefs?” Koku Anyidoho asked. 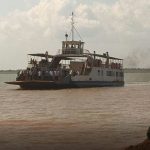