Information seeping through from the ongoing transition process indicate that the incoming administration will be ordering a fleet of customized Mercedes Benz saloon cars for Ministers and other government functionaries.

Nana ADDO’s government is said to have plans to overhaul the official V8 vehicles currently in use by appointees of the outgoing National Democratic Congress (NDC).

We gathered from sources close to the transitional team that the incoming NPP administration is mounting pressure on the outgoing government to allow its ministers and other appointees to buy off their official vehicles.

The NPP is expected to shun the use of 4 x 4 vehicles purchased for use by the John Dramani Mahama government and instead opting for a customized and a more luxurious fleet of Mercedes Benz vehicles.

This is sending worrying signals considering the fact that the NPP campaigned against what it termed the profligate expenditure by the Mahama administration, yet is set to repeat the same trend that it strongly criticized.

For the official Presidential inauguration ceremony on January 7, 2017, this paper has gathered that the NPP has already ordered customized suits from the high class London-based Ghanaian designer-Oswald Boateng.

These designer suits are expected to be donned by government officials on the day of the inauguration.

It is currently unclear how much the new administration has budgeted for its first round of spending on luxury cars and dress code, but rough estimates put the bill in millions of US dollars.

It appears history may be repeating itself as it did in 1979 when Akufo Addo’s father became the President and Dr. Abrefa Busia was the Prime Minister.

They were elected into office after they supported the overthrow of Ghana’s first President, Dr. Kwame Nkrumah.

This was after they led a campaign vilifying him [Nkrumah] as incompetent and described his infrastructure drive as a waste of taxpayers’ money.

However, their shoddy handling of the economy caused a great embarrassment to the government establishment, forcing the Military commander, General Kutu Acheampong to overthrow them.

Over 36 years later, critics think Akufo Addo and his running-mate, Dr. Mahmud Bawumia are set to repeat the mistakes of the Akufo Addo/ Busia administration with the signs of luxurious lifestyle they are trying to set up for the incoming administration.

Meanwhile, the outgoing NDC officials are said to have expressed caution at the offer made by the NPP for them to buy off their official vehicles because they believe it is a set-up in which the new Akufo Addo-led administration may turn take a u-turn and accuse them of unlawfully appropriating government property- a repeat of 2000 where NDC officials were hunted down by the NPP administration for taking home government assets.

The transitional process has been a rollercoaster affair with controversial issues being raised between the teams of the outgoing administration and that of the incoming government. 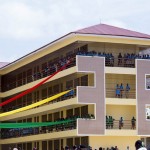