Communications Director of the National Democratic Congress (NDC) Solomon Nkansah has said President Akufo-Addo has failed Ghanaians by giving an amount of GHC20,000 to Alfred Woyome instead of retrieving the GHC51 million Judgement debt like he promised.

Making reference to the promise of Nana Addo, who was then the flagbearer of the New Patriotic Party (NPP) during the 2016 electoral campaigns to retrieve the GHC 51 million that was wrongfully paid to business man Alfred Agbesi Woyome since the erstwhile NDC government could not retrieve the money, Solomon Nkansah accused Nana Addo of giving an additional GHC20,000 to Alfred Woyome during the latter’s mother’s funeral when he (Akufo-Addo) should be staying true to his word hence breeding corruption.

“Before Akufo- Addo became President he promised Ghanaians that when he is voted into power he will retrieve the Woyome money and use it to help in funding the free SHS policy but now the President has given out an additional GHC 20,000 to Woyome through a delegation he sent to the funeral of Woyome’s mother.

So I ask, now that the President has given Woyome this amount of money, when will he (Nana Addo) retrieve the old debt in addition to this one because as the President, what ever he does is on the expense of the state.

You promise to retrieve the money for Ghanaians only to add more to it, that is not what he promised. Besides why would he give Woyome such an amount at his mother’s funeral, did the President tell us that Woyome is his friend or did he say he will retrieve the money of Ghanaians from him” He quizzed. 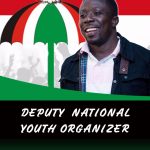