President Akufo-Addo last Monday delivered a speech on “Democracy and Development” at the Cambridge Union Society of the University of Cambridge, as part of his 3-day visit to the United Kingdom. The President said, the democracy Ghanaians intend to build and entrench will only succeed if it results in the building of a prosperous nation ,and in people who are at peace with themselves and with the world. He also touched on building a prosperous nation with equal opportunities.

The President as usual is just paying lip service. Can we have democracy without the rule of law? Ghanaians are currently in a functional dictatorship under President Akufo-Addo and that sacred fact must be established. Without our legislature, judiciary and state agencies, headmasters and headmistresses sitting and freely carrying out their constitutional and administrative duties, we cannot claim to be running a genuine democracy. Since he took over, series of worrisome developments have emerged bordering on a reckless throwback of Nana Addo’s basic state of nature, dictatorial tendencies and approach which no one is checking. The reintroduction of “culture of silence” and political harassment into our body politic has given President Akufo-Addo the space to govern with impunity. Lack of respect for rights and interest of people outside his favoured orbit is in full bloom, and his political opponents are already smelling his “Bokassa flavour”. He is doing everything possible to consolidate his personal power base. To achieve this, he wants to replace a legally elected E.C chairperson whose tenure is guaranteed by the constitution, and replace her with his favourite puppy. The intolerance of the President and his party folks and glaring insensitivity of his government, in spite of the outcries of Ghanaians against their undemocratic leanings, raise fear about the future of our democracy. Did the President see the crass attacks on former appointees and party officers of the NDC and can he hold Bible and swear before the good people of Ghana that such weighty attacks from his party members and persons who are very close to him, can come without his approval, Morey so as the main financier of the party and close pal of the President Ken Agyepong and party officials openly endorsed it.

May be we still must remind the President of some of his actions in the past and present;

1. He established his personal military wing and imported mercenaries from South Africa and Serbia to train them in weapon handling and other war equipments

2. He declared his famous all-die- be- die concept

3.He and his party made it clear that were not going to accept any election result apart from victory

4. Announced that they will declare their own results

5. supervised the dismissal and suspension of party members and executives who challenged his position on internal issues

6.Was the leader of the party when Chairman Adams and a young party activist were murdered

1.Sponsored some journalists and party apparatchiks to fix drones and other sophisticated gadgets around the residence of the former president to monitor him just to embarrass him.

2. Supervised the sacking, dismissal, transfers and suspension of government workers perceived to be supporters of the NDC

3. Supervised crass attacks and harassment of former appointees and NDC executives.Seized their vehicles and properties and physically harassed their wives, husbands and children

4. Used unconstitutional means to remove the governor of bank of Ghana and replaced him with his favourite puppy.

5. Established vigilante groups across the regions

6.Ordered his Attorney General to free hoodlums who attacked a judge in her court. Freed hoodlums who subjected his own security coordinator to severe beatings

7.Sacked the administrator at ridge hospital without recourse to laid down procedure

8. Supervised the beating of Inspector Bruce at the Presidency

9.Ordered the police not to disclose its report on corruption allegations against his deputy chiefs of staff

10. Hailed and praised the BOST boss for selling contaminated oil to unlicensed marketing companies. And ordered the BNI to stop independent investigations into the alleged malfeasance.

11. Appointed daughter, cousins and friends to occupy all the top positions in his government

12. Supervised the abrogation of legally signed contracts including the bauxite mining contract between Mr Ibrahim and Ghana Government

13. Supervised the issuance of a $2.25 billion bond by his cousin the finance minister, his wife and business associates

14. 800 oil companies formed by people at the presidency

15. $20 to $30 thousand being approved fee for people who book for appointment to meet the President.

16. State vehicles being sold secretly by some officials at the Presidency

17.Legally binding contracts being reviewed by his cousin’s law firm.

18.His family members are now controlling all the oil and energy transactions of government.

The President said we are witnessing a more stable cedi. Beloved, is the President here with us? Has he been following happenings in the financial sector? He inherited the second most stable currency in the subregion but carelessly watched it depreciate at an alarming rate. And he also said his government is creating a business friendly environment. May be, the President needs serious briefing on some of these sensitive issues to avoid future embarrassment. The latest world bank and Barclays South Africa suggest otherwise. Ghana has dropped heavily in rating in terms of “friendly business environment” and local investment. Did the President listen to the dealers at Abossey Okai after the budget presentation? Why did he refuse to enter particular places during his visit to Abossey Okai? His government’s bad economic management and refusal to follow laid down procedures have weakened many of our state agencies. For instance, how can he explain the fact that major institutions of democracy like the Electoral Commission, the judiciary, the assemblies have been deliberately debilitated to the extent that they can no longer perform their functions effectively for lack of funds and staff. Ghanaians are still pondering over the uncertainty surrounding the controversial appointment of the new auditor general and other persons whose age disqualify them from holding their positions. This development has completely enervated these state institutions from carrying out their functions as stipulated in the constitution thereby putting them under severe threat. Weakening of the EC is part of the plot to put the NDC and other opposition parties in precarious position in subsequent elections to the advantage of the Npp. Ghanaians are witness to the undue interference of our security agencies including the police, EOCO, the BNI in the activities of investigation of corruption allegations against government appointees.

Mr President, if this is democracy, then what is dictatorship. 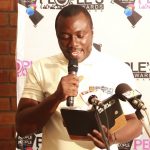