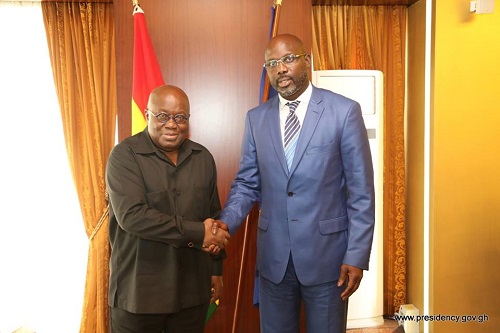 Following a peaceful presidential run-off on the 26th of December, 2017 the former football star garnered 61.5% of the vote while his opponent, Joseph Boakai was far behind with 38.5%.

After hearing news of Weah’s victory, President Akufo-Addo took to his Facebook page to congratulate him for winning the election at the second round and commended Mr. Boakai for his matured campaign.

He wrote, “Warm congratulations to George Oppong Weah on his decisive victory in Liberia’s peaceful presidential run-off, thus becoming the next President of the Republic of Liberia.”

Mr Weah, 51, won the first round of the presidential election in October with 38.4% of the vote, compared with the 28.8% won by second-placed Mr Boakai, 73. The failure of any candidate to secure an outright majority forced the run-off.

The National Elections Commission (NEC) said on Thursday that with 98.1% of the run-off vote counted, Mr Weah had won 61.5% of the vote while Mr Boakai was far behind with 38.5%.

Mr Weah played for a string of football clubs, including AC Milan, Chelsea and Paris St-Germain, and is the only African footballer to have won both Fifa World Player of the Year and the Ballon D’Or.

He entered politics after his retirement from the game in 2002 and is currently a senator in Liberia’s parliament.

Liberia, founded by freed US slaves in the 19th Century, has not had a smooth transfer of power from one elected president to another since 1944.

Ms Sirleaf took office in 2006, after her predecessor President Taylor was forced out by rebels in 2003, ending a long civil war.

Taylor is serving his 50-year prison sentence in the UK for war crimes related to the conflict in neighbouring Sierra Leone. 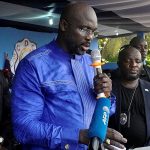 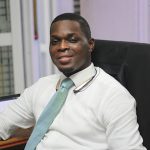