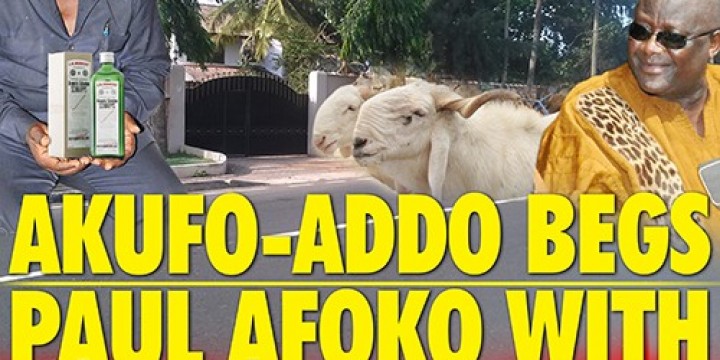 To Withdraw Lawsuit Against Freddie Blay and NPP But…….

Credible information picked up by The Herald, indicates that the flagbearer of the opposition New Patriotic Party (NPP), Nana Akufo-Addo, has secretly sent out emissaries to the house of the suspended NPP National Chairman, Paul Afoko, pleading with him to withdraw his lawsuit against the party, following his illegal removal from office.

Five individuals went to Mr. Afoko’s Airport Residential home with a bearded huge male sheep; Ram, with three bottles of alcoholic beverage, Schnapp, to have Mr. Afoko, withdraw the case from the court as quickly as possible.
http://ghanapoliticsonline.com
The Herald is informed that, Nana Addo’s team of lawyers, including Godfred Yeboah Dame, has advised alternative dispute resolution, hence the decision to go beg Mr. Afoko.

According to family sources, the suspended National Chairman, sent Nana Addo’s emissaries away with the animal and drinks, after revealing some interesting details on the matter to them, as well as some uncomplimentary remarks the NPP Flagbearer, has been making about him to party members behind closed doors to the surprise of the delegation.
http://ghanapoliticsonline.com
This paper leant that, the emissaries, later showed up at the home of ex-President John Kufuor at the same Airport Residential Area – Accra with the sheep and the three bottles of drink, to help them speak with Mr. Afoko, who is seen as his loyalist.

The ex-President was not home at the time, but this paper is informed that, the items and message were left behind for him to deliver to Mr. Afoko, who has publicly declared his unflinching respect for Mr. Kufuor.

The meeting was said to have been held late in the night with five respected individuals, whose names are being withheld, virtually on their kneels pleading with Mr. Afoko, in whose hands they believe the NPP’s victory rest, to accept Nana Addo’s apology.

According to insiders, the NPP presidential candidate, feels getting the peeved Mr. Afoko, to soften his stands on the case as the party readies itself for the 2016 campaign, is most ideal. He wants the NPP to appear united for victory, albeit cosmetic.

The struggle for power, influence and financial resources by the Akufo-Addo camp from the Kufuor camp in the largest opposition party, has resulted in clashes, injuries, destruction of properties, and two death, through acid and knive attacks.

The three suspensions, have been described variously as illegal, because they did not meet the required terms and conditions of the party. Mr. Afoko, went to court determined to establish the illegality of his ousting by Nana Addo’s camp.

Mr. Afoko, Mr. Agyapong and Sammy Crabbe, were accused of plotting an “Agenda 2020”, which is to ensure that, Nana Addo, loses his third time bid to become president in this year’s presidential and parliamentary elections.

Mr. Afoko’s determination to fight the case and also reveal those who actually masterminded the killing of Adams Mahama, the late Upper East Regional chairman, but hanged on his younger brother, Gregory Afoko, appear to be scaring Nana Addo, therefore his sheep and schnapps to him.

Following the rejection of the gesture, Nana Addo’s emissaries, amidst uncertainty, shock and shame that Nana Addo had not told them much ahead of the meeting with Mr. Afoko, headed straight to the Airport West house of former President Kufuor for his intervention.

But as if the request by Nana Addo was never meant to be, they met Mr. Kufuor’s absence, and so in their frustration, left the sheep and schnapps in his house for onward delivery to Mr. Afoko.

The Herald’s information as at Wednesday, was that the sheep is still in the residence of ex-President Kufuor, with no indication Mr. Afoko or his agents, will be coming for it for pepper soup.

This comes months after the Herald revealed how ex-president Kufuor, assembled some imminent “Men of God” to his house to settle disagreements between Nana Addo and Mr. Afoko, to present a united front for the party, as it tries to snatch the presidency from the governing National Democratic Congress (NDC) and its presidential candidate, John Dramani Mahama.

Clergymen such as the General Overseer of the International Central Gospel Church (ICGC), Dr. Mensa Otabil, Presbyterian Moderator, Prof. Emmanuel Martey, the Metropolitan Archbishop of the Accra Catholic Church Right Rev. Charles Palmer Buckle and ex-Presiding Bishop of the Methodist Church who doubles as chairman of the Disciplinary Committee of the NPP, Rev. Emmanuel Asante Antwi.

The meeting ended inconclusively with Nana Addo saying, he had nothing against Mr. Afoko. Indeed, exactly a week after that meeting, Mr. Afoko, also called a Steering Committee Meeting at the NPP Headquarters, but it was boycotted by Nana Akufo-Addo’s loyalist, meaning the clergymen, embarked on a fruitless venture.

Those who made it to the meeting were, Paul Afoko, Kwabena Agyapong, National Women Organizer, Otiko Djaba, and party elder, C. K. Tedem.

At the secret meeting with the clergy, this paper gathered that, an emotionally charged Rev. Prof. Mantey, told Nana Addo in the face that, his actions were destroying the NPP and that, the twice defeated flagbearer, should forget of becoming the President of this country in the next election, should the current infighting in the NPP continues.

In the presence of ex-President Kufuor, the Presby Church boss, sternly admonished the NPP flagbearer to stop his divisive leadership style of picking and choosing national and regional executives as those he preferred to work with, instead of having a united front.

Sources at the meeting told The Herald that, Mr. Akufo-Addo, who was shocked and badly embarrassed by the outburst of the renowned Presby Moderator, slammed the back of his head on the chair he sat on. Surprisingly, insiders told The Herald that, the General Overseer of ICGC, Dr. Otabil, who also spoke during the meeting, could not say anything politically meaningful, but engaged in diplomacy.

This paper is informed, only Rev. Prof. Mantey, surprised many, as he stood his grounds and faced the flag-bearer squarely by being blunt him.

Days after the meeting, Freddie Blay, the Vice-Chairman of NPP, became the acting as National Chairman, John Buadu was who was the NPP National Organiser also took charge of the party as acting General Secretary.