In a major revelation that puts the saga surrounding the GITMO-2 in its right perspective, MP for Bawku Central, Hon. Mahama Ayariga has revealed that President Akufo Addo and his government received a total sum of GH¢595,765 from the American government for the upkeep of the two.

Speaking to Joy FM yesterday evening, he revealed that the U.S government gave the Mahama government $300,000 to be used for the upkeep of the two Yemini Guantanamo detainees, Mahmud Umar Muhammad Bin Atef and Khalid Muhammed Salih Al-Dhuby, for the two years they will stay in Ghana.

The money was paid directly into a National Security account at the Bank of Ghana. The Bank converted it to cedis at an exchange rate of GH ¢3.8918 per dollar. The $300,000 therefore amount to ¢1,167,540
The Mahama government spent GH ¢571,774.90 on the welfare of the two detainees by the time it was exiting office, leaving a balance of GH ¢595,765.10 which was handed over to Akufo-Addo and his government together with handing over notes by the new case officer at the National Security Secretariat
The Bawku Central MP also revealed that the claim by the American Ambassador to Ghana that he was not aware of the refugee status given the two detainees by the NDC government cannot be true because he was constantly briefed about the detainees. He revealed the US Embassy was part of the decision to grant the two detainees refugee status and that the Ambassador was constantly briefed about every step the government was taking through Tom Miller, the Case Officer of the US Embassy.
Hon. Ayariga further debunked the claim that the two detainees were issued with Ghanaian passports, stating that what they were issued with were refugee identification documents to enable them access basic amenities like health care during their stay in the country.
President Akufo Addo, while in opposition, condemned the Mahama govt for accepting the two detainees into the country on compassionate grounds, stating that he would send them away if he is given the nod to be President of Ghana. However, he has failed to live up to his pledge since he became President. Last year, he had the opportunity to send them away when the Supreme Court ruled that the stay of the two in the country was illegal. However, he failed to do so, choosing rather to go to parliament to have their stay legalized.

According to Ayariga, the refugee status of the two detainees ends in July this year. 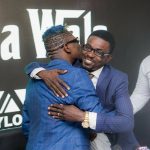